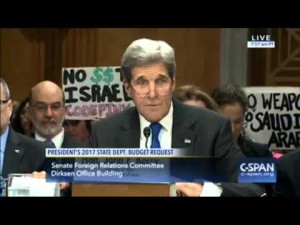 Washington DC occupies roughly 70 square miles that are home to one of the planet’s true phenomena: Within its borders it is virtually impossible to get a straight answer to a yes or no question. Instead of a quick one word response, strange forces act upon respondents forcing them to utter long, rambling, stuttering replies. Science has proven itself incapable of solving this mystery.

Our latest example this comes to us from John Kerry, who is asked a very pointed yes or no question.

Kerry replies:“You don’t use a private server. Would you allow members of your staff to use a non-official, non-secure, server for transmitting classified information?  …Just yes or no.”

“Ah…Senator, I understand.  Ah… We have very specific procedures in place in the department. I brought in an inspector general. I wrote a letter to the inspector general asking him to review our entire process. And so…In today’s world, given ah.. all that we’ve learned and what we understand about the ah…fragility – the, ah, vulnerability – of our system, we don’t do that, no.”

For the record, he could have just said “no.”  Instead, it took 61 words (and a few stammerings) to tell you that the State Department is well aware of the dangers – and criminal penalties – associated with doing the things that Hillary Clinton did.

We’re sure Hillary appreciates his valiant effort to bury his answer in a bunch of meaningless mumbo-jumbo.

The Republican members of the Senate Judiciary Committee have officially declared they will not hold a hearing on anyone President...