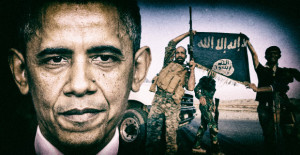 As the FBI works through federal courts to force executives at Apple Computer to cooperate in applying high-technology solutions to unlocking crucial information generated by terrorists on Apple digital devices, President Obama presses full steam ahead with his personal vendetta against GITMO, the facility which has been successfully maintained for detaining Islamic terrorists committed to beheading or incinerating innocent people in order to advocate on behalf of the so-called “Religion of Peace.”

This conflict of wills can best be described as a concerted effort to protect national security and 330 million Americans versus the selfish, narcissist, inexplicable rantings of a failed ideologue to defend a “legacy” that, in fact, he should be working to deny!

“Keeping the U.S. military prison at Guantanamo Bay open is “contrary to our values,” President Obama said Tuesday, as he released a plan that examined 13 potential sites for transferring the suspected terrorists but did not propose any specific location.

His plan sets up a last-year confrontation with Congress about a campaign promise made eight years ago. Terrorists use Guantanamo as propaganda to recruit, and maintaining it harms U.S. national security, he said.”

With all due respect to our muddled Commander-in-Chief, protecting our nation and the American people against the ravages of Islamic savages is far and away more important than fulfilling an ignorant campaign promise made eight years ago by a naïve community organizer who has failed to learn a damn thing about American values or history over the past eight years!

Bottom Line: America needs GITMO, and most certainly does NOT Need Barack Obama and his insane, anti-American thinking and despicable legacy!

In Case You Missed It:  China Must Be Held Accountable for COVID-19 Pandemic, Arkansas Attorney General Says
Posted in Freedoms.

At dawn on Feb. 10, a camp for displaced people in the northeast Nigerian town of Dikwa began stirring to...