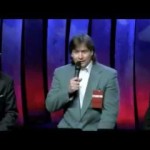 Dr. Jonathan Matusitz, from Belgium, lectures on Terrorism and Communications and is a very popular professor at the University of Central Florida. Terror-linked CAIR has been trying relentlessly to get him fired for speaking the truth about Islam. They failed, but now they are trying to shut down his next public speaking engagement.

Look at the number of members of the Muslim Brotherhood that are known to be working in the White House.

If one is a practicing Muslim he must commit Jihad against Infidels.

Comments by Republican presidential candidate Donald Trump proposing a ban on Muslims entering the US  and by fellow candidate Ben...