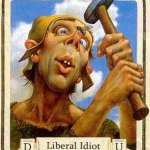 Most liberals (all are about five months pregnant with Communism) are sanctimonious hypocrites who weep copious tears over the “mistreatment” of whales at Sea World, slaughter of baby seals in Newfoundland, and closely caged chickens while they demand the slaughter of innocent unborn babies—so they won’t suffer at the hands of uncaring, abusive parents! Liberals seem to keep tears near the surface of their eyes to run on cue for a television camera whether campaigning for the environment, fur-bearing animals, or dogs and cats in animal shelters.

Liberals demand that vile perverts be permitted to teach in schools but vocal Christian teachers should be gagged! Homosexuals and lesbians should have access to the classrooms, but Bible Christians must never mention Christ nor should teachers keep a Bible in the classroom or read it during free time!

Most liberals tell us that any kind of filth must be permitted at state universities, but conservative school newspapers must be banned and the editor and reporters suspended from school.

Liberals become apoplectic when Christians and conservatives demand that vulgarisms in textbooks be cleaned up, yet the liberals rewrite the Bible and other literature to excise words such as husband, wife, manhood, mankind and manhole cover. It is now personhole cover!

Windbag liberals told us it was good to boycott South Africa (before a Communist became president) but it is wrong for us to boycott Red China, Red Korea, Red Vietnam, and Red Cuba or Radical Iran! However, it is not too bright to feed a buzzard (of any species) determined to pick out your eyes.

Liberals don’t have any tears for one and a half billion people in China with its slave labor, forced abortions, two-child limit, and no majority rule, but weep copious tears for baby seals, yellow belly sapsuckers, trapped whales, and fur-bearing animals.

Liberals tell us Hitler was a monster (and he was), and he is always called a right-winger, but the fact is Hitler was a socialist! In fact, we have a presidential candidate who is an unabashed socialist! Most people don’t know that Nazis were members of the National Socialist Party. While Hitler was a bad guy, Marx, Lenin, Stalin and Company were simply misunderstood choir singers (who murdered over 100 million people)!

Folks, it is time we recognize our enemies as our enemies and stop playing “footsie” with Communists in North Korea, China, Cuba or Vietnam. We have been playing the dangerous, disastrous and deadly game of “Let’s Pretend to Stop the Communists” while we support their economy with trade and gifts. Is that treason or only stupidity?

Liberals sometime talk of patriotism; however, when they hear songs such as “America,” “Battle Hymn of the Republic,” “Stars and Stripes Forever,” and slogans such as “Better Dead than Red,” “America, Love it Or Leave It,” they get as uncomfortable as a dog in hot ashes.

Those Bozos of the Busybody Roundtable have preached for 60 years that Washington, D.C. is the Fountain From Which All Blessings Flow, have helped murder more than a million babies each year, helped produce an astronomical crime rate by pampering criminals, and have relegated generations to slavery via a welfare system that is nothing less than plunder of working citizens.

These members of the League of the Willfully Blind tell us that children should hear all sides of an issue since ideas cannot hurt them; however, that does not hold true when creationism is taught in the public schools!

So where is the ACLU when they are needed to correct an injustice? They are busy writing news releases about their dedication to fairness, equality, and the American Way. Hypocrites! (It’s always fun to remind them that their founder was a Red.)

Sanctimonious liberals are divisive, dopy, and dangerous people and they are the enemy to good government and common sense.

The Republican debate that took place last night in Houston, Texas, was phenomenally good for America and freedom lovers everywhere....