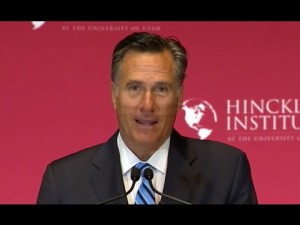 With all due respect to Mitt Romney and other self-righteous elitists who have unilaterally decided that Donald Trump is a man of low degree, a fraud, liar, and otherwise unqualified by reason of temperament, judgment, and intellect, to represent the Republican party, the following question must be answered: What about the millions of citizens whom have voted, and are planning to vote, for Trump in the primary process?

Are we to understand that the patriotic citizens who support Trump and whom are so very desperate to take back America from the likes of Barack Obama and Hillary Clinton, John Boehner, and Mitch McConnell, are unwashed idiots easily hoodwinked by a quick-talking reality TV star who lacks the humility, class, intelligence, and moral judgment to occupy the Oval Office?

And, further, that the wisdom and judgment of those millions of everyday common Americans who believe in Trump are so flawed that the will of the people should be suspended in deference to the of the whims of moneyed elitists who STILL do not comprehend the genesis of the Trump movement, and most likely never will?

Are patriot concerns over the Constitution, American sovereignty, and American borders, language, and culture just simple minded distractions that are to be ignored in order to coddle the wishes of powerful, rich men and women driven by a lust for cheap labor, a docile, easily manipulated citizenry, and one-world government?

After searching the Constitution somewhat, it is my conclusion that the blessed document contains nothing that would deny citizens who support people like Donald Trump from being fully heard, and elected if that should be the will of the majority.

This despite the petty whining coming from those who because of their vast riches and power believe their desires are more important than those of average Americans!

Simply put, many Americans are “fed up” with the Obamazation of our once-great nation and culture, and are equally outraged by Republican complicity in Obama’s lethal “Fundamental transformation of America” into a third-world sanctuary nation where illegal aliens, Jihadist sleeper cells, and other undesirables are welcomed with open arms while law-abiding citizens are targeted for political persecution, or worse, by out-of-control government bureaucrats.
There can be no compromise, no horse trading when it comes to the future of America.

This time, We the people must have OUR way!

Ted Cruz, A Personal Look At A Humble Man