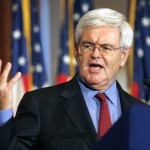 In a very odd interview last night and Newt Gingrich was being interviewed by Bill O’Reilly and discussed what one would consider conspiracy theorist tin foil hat like talk about Initiation Rites and Secret Societies to become the US President.

Newt revelations were quite interesting: he claims the reason why the Republican Party hates Trump is because he has not gone through the “initiation rites” and is not a member of the “secret society.” What the heck?

Here is a clip:

What did he mean by this? which “rites” and which “secret society”?

Trump was right to skip CPAC. The votes are in Kansas not Washington. Why give the anti-trump activists a target

In Case You Missed It:  WHO Director walks back his statement that some countries are using COVID-19 vaccine boosters to “kill children”
Posted in Freedoms and tagged Election, Republicans, Speaker Newt Gingrich.

Science Is Turning Back To The Dark Ages

By Dr. Benny Peiser Man-made global warming theory has been propped up by studies that many scientists have dismissed as...