Pope Francis was recently asked by the French Catholic Magazine La Vie about the “refugee” crisis. Here is what he had to say: 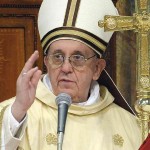 Pope Francis: The only continent that can bring about a certain unity to the world is Europe,” the Pope adds. “China has perhaps a more ancient, deeper, culture. But only Europe has a vocation towards universality and service.” … “If Europe wants to rejuvenate, it is necessary for it to find anew its cultural roots. Of all Western countries, the European roots are the strongest and deepest. By the way of colonization, these roots even reached the New World. But, by forgetting its history, Europe weakens itself. It is then that it risks becoming an empty place.”
La Vie: Europe, an empty place? The expression is strong. … Because in the history of civilizations, emptiness always calls fullness to itself. (Incidentally, the Pope becomes clinical [in his diagnosis]):
Pope Francis: “We can speak today of an Arab invasion. It is a social fact.” … “How many invasions Europe has known throughout its history! It has always known how to overcome itself, moving forward to find itself as if made greater by the exchange between cultures.”
In Case You Missed It:  "I can't feed my son!" Baby formula shortage reaches critical stage in US as desperate parents search for rationed supplies
Posted in Freedoms and tagged Europe, Illegal Immigration, Migrants, Muslims.

In a very odd interview last night and Newt Gingrich was being interviewed by Bill O’Reilly and discussed what one...