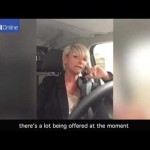 Rosita Kohzina is a businesswoman. While heading to her car in Vienna, three different Muslim “refugees” independently attacked her in broad daylight, grabbed her breasts, and then tried to rob her. As she relays in the video that she made minutes after the last attack, the final attacker even tried to break into her car and when he could not, he was so mad that he jumped on her car roof and then punched out a random woman walking down the street.

From the UK Daily Mail:

A woman in Austria has issued an emotional warning to others after having her handbag snatched, her breasts groped and fighting off a carjacker in three attacks by ‘non-Austrian’ men.

Businesswoman Rosita Kohzina recorded her furious rant just minutes after the final assault in which she said a man tried to force open her car doors at a traffic light on a trip to Vienna.

In the video, which she posted online, she said: ‘I am really seething. And I don’t want anybody to tell me I’m making this up and that it never happened.’

She said the carjacker pounced after she was forced to fight off a bag-snatcher and a predator who groped her breasts.

am really seething. And I don’t want anybody to tell me that I’m making this up and it never happened.

Listen ladies, I’ve just recently been forced to make the acquaintance of some of these non-Austrians.

First of all I’ve had to defend my handbag and my Ipad. Fortunately I managed to defend myself but I still don’t find the whole experience cool. And just now somebody tried to get into my car which fortunately I had locked from the inside.

He was so annoyed about it that he then trampled on the roof and it was difficult for me to control myself. Fortunately I managed to keep my common sense and stayed in the vehicle. He however was clearly not content to sit still and a completely innocent woman who had nothing to do with the incident ended up being flattened. That was just because he was angry that he couldn’t get into my vehicle. I have to say that was too much even for me.

Ladies, I would urge everyone to do a self-defense course. There’s a lot being offered at the moment. It is not the last-chance saloon anymore, at least not for us women. There are now people like this out there that are stealing handbags and groping us and it’s not funny at all and sadly I am not talking about a isolated case. I am sure that may of you don’t realize that you can help yourself. Many of you are sitting at home worried about going out or traveling in a car. Some of you probably leave your handbags at home.

So once again ladies, do a course to defend yourselves.

In Their Own Words: Lenin, Stalin, Obama, and Hillary

By Andrew Thomas It is beneficial to remind ourselves periodically of the realities in the struggle between Constitutionalism / Capitalism...