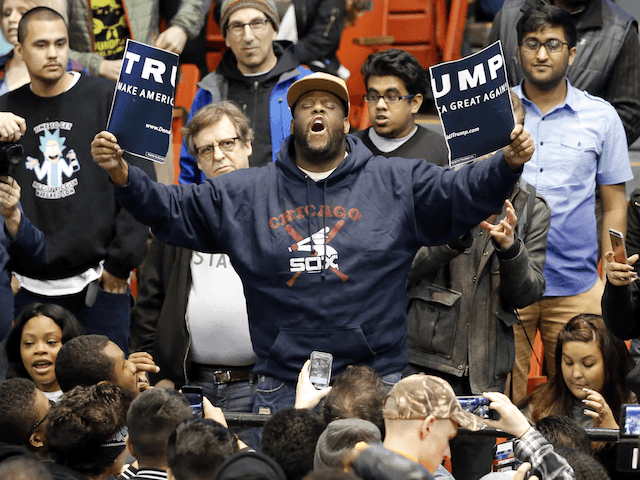 The rallies of presidential candidate Donald Trump are being infiltrated by leftist racist Black Lives Matter protesters inspired by Obama to cause unrest inside the Republican party, namely Trump rally’s.

Do not be fooled by the leftist media trying to turn the Tables and blame Trump, these are the same BLM protesters that rioted through cities, burned down businesses and cars, and beat people on the streets, while being cheered on by President Obama. These leftist BLK protesters went looking for trouble and found what they were seeking.

A viral video of a Trump supporter throwing a punch at a BLM protester Rakeem Jones while he was  being escorted out of the building. The protester,  was immediately thrown to the ground by local law enforcement, unaffiliated with the Trump campaign. Will Obama invite Rakeem Jones to the Whitehouse in the coming week?

Most will condemn the uncalled for attack, including Trump, but the media is not hesitating to take advantage of the opportunity by treating Trump as if he ran into the crowd and punched the guy himself.

The attacker, John Franklin McGraw of Linden, N.C., has only re-fueled the flames of the dying narrative that Trump and his supporters are inherently racist.

This will be the only story talked about for the next few days because as we know it is much more important than possible WWIII tensions escalating,  and of course Hillary’s email scandal potentially resulting in an indictment. 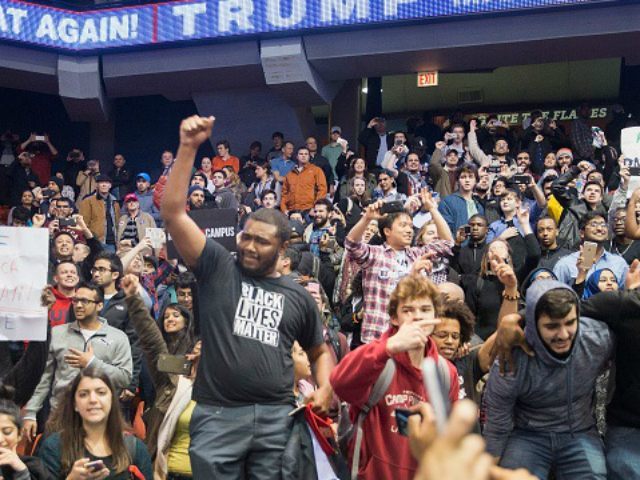 A lot of the anti-Trump protesters were chanting “Bernie!” Does Sanders have a responsibility to tell his supporters to stand down?

Mr. Trump after meeting with law enforcement has determined that for the safety of all of the tens of thousands of people that have gathered in and around the arena, tonight’s rally will be postponed to another date.

BLM protesters succeeded in limiting free speech today and forcing the rally to be canceled with threats of violence.

Thank you very much for your attendance and please go in peace Trump said.

Can you image 100s of Trump supporters swarming a Sanders rally, engaging in mass violence & being referred to by the MSM as "protestors"?

.@realDonaldTrump: "I don't want to see people get hurt – any people, on either side" #greta #TrumpRally @FoxNewshttps://t.co/CVK58rJrn0

Trump says President Obama has been a divider and he will be a “unifier.” He says he will unite the country by bringing jobs back. Trump says he told the police that he didn’t want to see his supporters and the protesters clash. He says the protests are important because they are revealing some serious problems in America.

Leftist/Progressive refers to protesters who are preventing cops from doing their jobs as “brave.”

Sad day for #Democracy as the left prove they only like elections when they know they'll win. #TrumpRally pic.twitter.com/nHQIINdGKk

Face Off: Chicago police on horseback vs anti-Trump protesters outside arena where @realDonaldTrump speaking. pic.twitter.com/nHrQwPbCZS

South Sudan fighters allowed to rape in lieu of wages

A new UN report Friday reveals that children and the disabled have been burned alive in South Sudan, and that...