A new UN report Friday reveals that children and the disabled have been burned alive in South Sudan, and that members of the pro-government militia have been allowed to rape women in lieu of wages. 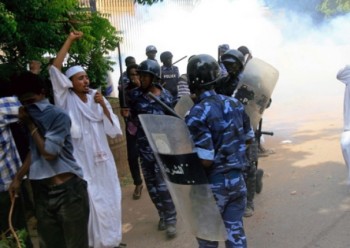 The report described the conditions in South Sudan as “one of the most horrendous human rights situations in the world.”

“The report contains harrowing accounts of civilians suspected of supporting the opposition, including children and the disabled, killed by being burned alive, suffocated in containers, shot, hanged from trees or cut to pieces,” the UN human rights office said in a statement with the report.

“Credible sources indicate groups allied to the government are being allowed to rape women in lieu of wages but opposition groups and criminal gangs have also been preying on women and girls.”

According to the report, the widespread prevalence of rape “suggests its use in the conflict has become an acceptable practice by (government) SPLA soldiers and affiliated armed militias.”

No less than 1,300 rape cases were reported in South Sudan’s Unity state in just five months of last year according to the report.

An assessment team that was deployed in South Sudan from October to January made the findings in the report, and said “state actors” committed most of the crimes. It noted the attacks on civilians and rape cases could constitute war crimes and crimes against humanity.

In parallel to the UN report, Amnesty International released its own report on an incident in which South Sudanese soldiers brutally murdered 60 men and boys last October by locking them in a shipping container until they suffocated.

Amnesty International researchers reported finding remains of skeletons from the murders. Over 42 witnesses were interviewed, including 23 people who testified to seeing the victims forced into a shipping container and later saw their bodies either being removed or at a mass burial site.

Violence has run rampant in South Sudan since December 2013, when a power struggle between President Salva Kiir and his rival Riek Machar turned into an all out civil war.

Remember ACORN? While the infamously corrupt organization may have dissolved years ago, its handiwork still lives on. You may recall...