The occupying Turkish Erdogan regime continues to severely repress Byzantine culture. The land which is today known as Turkey is actually Byzantine or the East Roman Empire, a traditionally Christian empire which is under Muslim occupation since 1453.

At the time, the Roman Pope of the Western Roman empire claimed rulership over the Byzantinian Pope who refused. For this reason, Rome withdrew help from Byzantine and allowed it to be conquered by the Muslims.

Ever since then Muslims have slaughtered the native European population and turned the country into a Muslim slaughterhouse. 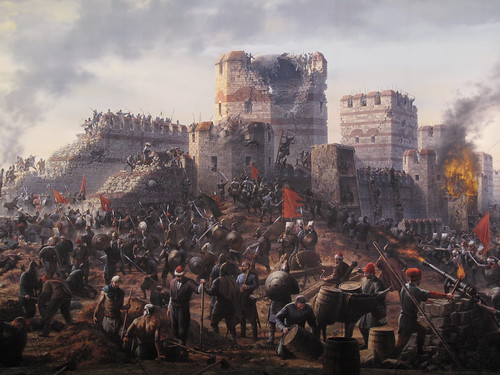 More than 5 million Christians were killed and their homes stolen, destroyed as well as the rest of their property confiscated. The way in which the Muslim Turks illegally took over Byzantine resembles the current ISIS slaughter perpetrated by radical Muslims in the Middle East.

Interestingly Turkey today criticize Israel for reclaiming its own land which was stolen by Arab Muslim settlers. Turks claim that the Jews are Khazars, and that Khazars rule the world. The reason for this is mainly that the Khazars were Turks. Thus by creating the lie about the Khazars, the Turks are secretly announcing themselves as a superior race because they know that the Khazars, like them, are Turks.

Last but not least it should be said that Turkey has not achieved anything since the illegal occupation began. They instead destroyed a lot of culture, such as during the Armenian genocide which killed upwards of 8 million Armenians.

The only achievement Turkey has produced since then is the world record for the man with the longest nose in the world. His name is Mehmet Ozyurek, and he is Turkish, not Jewish. It appears that the Turkish antisemitic propaganda of the long Jewish noses actually better suits the Turks themselves.

Terrorism expert Erick Stakelbeck, host of “The Watchman” on the Christian Broadcasting Network and author of “ISIS Exposed: Beheadings, Slavery, and the Hellish Reality of Radical Islam,” says Westerners are now in the familiar position of confronting the never-ending jihad by Muslims against the Christian world.

In Case You Missed It:  Get Ready for the Economic Collapse
Posted in Terrorism and tagged Christian Genocide, Europe, Islam, Jihadists, Turkey, Turks.

Lee Edwards wrote earlier this week on Nancy Reagan. She was his closest and most influential adviser in matters of personnel....