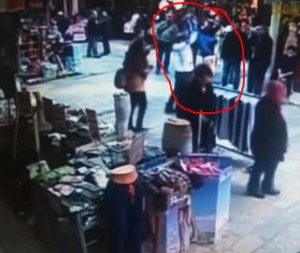 Thankfully the child appears to be OK and a lot of people confronted the man who did this. However, imagine if this had been in Europe- say, a non-Muslim European man slamming the same Muslim toddler into the ground. It would have made international news and be replayed constantly with the sole intention of inflaming men’s passions.

Thankfully Russian Media picked up on this video and brought it to international attention. This video is a reminder that the media in the West is not “free” at all, but is a highly controlled network of mutual interests who over-propagate or outright ignore different types of media so in order to form public opinion to the tastes of those who own the media. Remember, the media in any country is as only as free as the will of the men who own the media organs.

In Case You Missed It:  ‘Awoman’ Prayer Just One Example of Liberals’ Gender Obsession
Posted in Freedoms and tagged media, Migrants, Turkey.

Secret Service agents needed to surround Donald Trump on stage during his rally in Ohio on Saturday as a man...