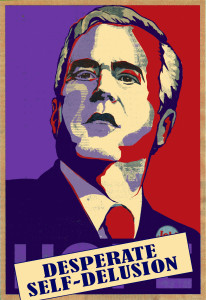 Despite overwhelming evidence which suggests that the American people are fed up with the failure of the federal government to control US borders and enforce existing immigration laws, and widespread opposition to the entire notion of amnesty for illegals, Jeb Bush took the position that illegal aliens should receive leniency, rather than strict enforcement of the law.

Bush based his position on his odd belief that illegal aliens deserve special consideration because their invasions are committed as “Acts of love.”

As reported at reference 1, Jeb Bush said the following:

“There are means by which we can control our border better than we have. And there should be penalties for breaking the law,” he added. “But the way I look at this — and I’m going to say this, and it’ll be on tape and so be it. The way I look at this is someone who comes to our country because they couldn’t come legally, they come to our country because their families — the dad who loved their children — was worried that their children didn’t have food on the table. And they wanted to make sure their family was intact, and they crossed the border because they had no other means to work to be able to provide for their family. Yes, they broke the law, but it’s not a felony. It’s an act of love. It’s an act of commitment to your family. I honestly think that that is a different kind of crime that there should be a price paid, but it shouldn’t rile people up that people are actually coming to this country to provide for their families.”

As reported at Reference 2:

U.S. Immigration and Customs Enforcement has revealed that 124 illegal immigrant criminals released from jail by the Obama administration since 2010 have been subsequently charged with murder.

A Center for Immigration Studies report on the data from ICE to the Senate Judiciary Committee added that the committee is not releasing the names of the murder suspects.

“The criminal aliens released by ICE in these years — who had already been convicted of thousands of crimes — are responsible for a significant crime spree in American communities, including 124 new homicides. Inexplicably, ICE is choosing to release some criminal aliens multiple times,” said the report written by CIS’s respected director of policy studies, Jessica M. Vaughan.

She added that 75 percent were released due to court orders or because their countries wouldn’t take them back.”

During his aborted campaign for the Oval Office, Bush actually boasted that he would be able to sell his non-conservative views on immigration to otherwise reticent conservatives and others skeptical of rewarding illegal aliens.

In Case You Missed It:  4 Takeaways From Arizona’s Election Fraud Hearing
Posted in Freedoms.

The Federal government and their allies are choosing dubious environmental prescriptions to effectively impose a new tax on electricity increasing...