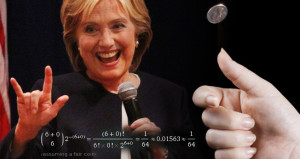 The Republican Party, once a proud bastion of self-determined, independent, red-blooded American patriots, has been decimated, all but extinguished, really, a part of the harsh, unforgiving, transformation of America, commonly known derisively as the Obamazization of American greatness.

This tragic suspension of American values and Exceptionalism has caused the once- stellar Party of Lincoln and Reagan to descend into a quagmire of indecision and confusion rivaling that of the Marxist, Islamist-obsessed, anti-American nincompoops known, without even a smidgen of affection, as socialist Democrats.

In fact, the GOP has grown so dysfunctional and clown-like that respected intellectuals and diplomats, such as Rand Paul and others widely known as buttoned-down types, are culled out by the Party’s political colander, with all due haste and passion!

The remaining GOP political warriors in 2016, inarguably the most important presidential election in US history, include, 1) a wealthy reality show star addicted to profiting through manipulation of bankruptcy law, 2)a non-competitive governor from Ohio whose objective in running is one of the great unsolved mysteries in Party history, and 3) and a brilliant, tough, non-Spanish speaking Hispanic from Texas who may be the most despised member of the US Senate in history among Senate colleagues on both sides of the political divide.

The GOP’s problems are magnified many times over by party “leadership” which arrogantly believes that run-of-the-mill Republican voters are incapable of serious contemplation and discernment, and must, therefore, be completely ignored when it comes to nominating a GOP candidate for the presidency.

Sadly, Party elitists would rather see a low-energy, but malleable old school loser, like Jeb Bush carry the Party banner to yet another dismal defeat in the forgettable tradition of John McCain and Mitt Romney, than side with Donald Trump who is bringing millions of new voters into the ‘big tent’ of the Republican Party, bolstered by a tsunami of public rage not witnessed since the 60s.

This elitist versus common voter war in the party has made nearly impossible the task of selecting a nominee while maintaining a semblance of respect and dignity. Elitist warriors are reportedly willing to succumb to the Hillary candidacy, so intense is the intra-party discord and enmity.

All of this turmoil has party leaders tied in knots: How to nominate a standard-bearer without destroying the party itself?

Oddly enough, the answer may be found by studying the Democrat party solutions for conflict resolution.

An example is provided in the Iowa party caucus proceedings which resorted to a “coin toss” to settle the issue between Hillary Clinton and Bernie Sanders!

Although not a sophisticated or reasonable democratic alternative, the ‘coin toss worked out for the Democrats, mostly because Hillary Clinton managed to win six coin tosses in succession!

The big question: Can the GOP elitists and unwashed masses agree to use a coin toss to settle the nomination crisis, rather than relying on old-school solutions like a brokered convention to nominate a candidate who can win in November?

In Case You Missed It:  Fitness Classes Are All but Banned in DC Over Baseless COVID-19 Fears
Posted in Freedoms.

In Their Own Words: Down Syndrome Across the World

The everyday connections of children born with Down syndrome are highlighted in new video interviews about the lives, friendships, and...