You’re gonna think this came from The Onion, but I assure you it didn’t. This really happened here in America. This is the level we are at.

People are always talking about how they are afraid of terrorism. Or economic collapse. You know what I’m afraid of?

The younger generations of college students who have apparently been socially engineered to be complete and utter pansies who run crying to authorities any time someone disagrees with them and who beg to have everyone stripped of their First Amendment right to free speech because they apparently have the backbones of garden slugs.

These are the young adults of America’s “future”??

his is a student response to someone chalking campus with “fear-inducing” pro-Donald Trump messages like… wait for it… “Trump 2016” on the campus of Emory University.
Check out this harrowing tale… if you dare!

The chalkings that generated such controversy appeared overnight throughout Emory’s campus. College junior Harpreet Singh said that, initially, he did not find the chalkings significant. “I saw one big one, ‘Trump 2016,’ so I thought it was an isolated incident and I didn’t think much of it,” he said. “I thought, ‘Okay, it’s just a guy who wants to write whatever he wants to believe in for his political campaign.’ I was like, ‘Okay, I’m fine with that, to a certain extent.’” 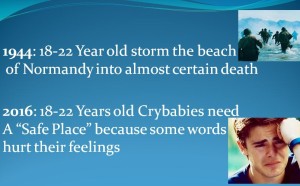 Singh reported having seen multiple chalkings that read “Trump 2016” between Cox Hall Bridge and the Dobbs University Center (DUC). “What I also saw on the steps near Cox [Hall] Bridge was ‘Accept the Inevitable: Trump 2016,’” he said. “That was a bit alarming. What exactly is the inevitable? Why does it have to be accepted?”
And THIS:

“I’m supposed to feel comfortable and safe [here],” one student said. “But this man is being supported by students on our campus and our administration shows that they, by their silence, support it as well … I don’t deserve to feel afraid at my school,” she added.
And also this:

“How can you not [disavow Trump] when Trump’s platform and his values undermine Emory’s values that I believe are diversity and inclusivity when they are obviously not [something that Trump supports]” one student said tearfully.

TEARFULLY??
This story, in all actuality, has nothing to do with Trump. Or even politics.

These are adult-aged manchildren and womenchildren who apparently cannot handle it when people have opinions that differ from their own, opinions which fall outside of the sphere of allotted politically correct opinions they have been propagandized and programmed with since their tiny tot days in the brainwashing centers that pass for American public schools these days.

Back to reality, we’re talking about CHALK.

Chalk that disappears with the first hint of rain or eventually just wears off on its own.
Instead of getting their own chalk and writing their own message, or just simply ignoring someone who they disagree with politically, these college students began a protest and ran crying to the university president in fear trying to shut down free speech — a common scene on college campuses these days.
The students demanded that the university to publicly, officially disavow Trump (meaning, they wanted a university to openly take a political stance) and everything Trump stands for. The university would not because universities are not supposed to endorse political ideologies.

Here’s a picture of the meeting about it in the president’s office:

Look at how serious they are, as if sidewalk chalk is a real issue.

The university did respond by changing the campus chalking policy, however. Now if a student wants to write something on the sidewalk at Emory in chalk, they have to reserve the right through an online platform so it can be pre-approved.Way to uphold the First Amendment there, Emory.

In addition, the university is reviewing security footage to attempt to find the dastardly devil who dared to chalk “Trump 2016” on the sidewalk and terrorize these precious little snowflakes.

One wonders what happens to these “adults” once they leave the hallowed safe space that is their campus and they have to deal with the real world where no one cares if they are scared of chalk. A world where someone might — GASP! — put a “Trump 2016” sign in their own front yard, for example? A world where the news media might show pro-Trump rallies in the 2016 election coverage.

Do they fall down on the sidewalk and ball into a fetal position and weep? Drive their cars into a tree?? Do their heads explode like in the movieScanners???

On a side note, these students are okay with seeing the words “Trump 2016” physically together without bursting into tears and cowering in fearso long as the word “stop” is with them.

Notice the word “gently” in this paragraph… Better wrap up the meetinggently. Better not hurt these poor darlings by wrapping up the meeting like adults…

(Hat tip: My mom, who sent me this story absolutely horrified at what is happening to this country.)

Some millennials might be spurring a comeback of Western civilization at one of the nation’s premiere universities. Stanford University students will...