When she isn’t shipping in more Syrian refugees, or trying to find new ways to destroy the Greek economy, the German Chancellor Angela Merkel is fond of quoting an alarming statistic: Europe accounts for just 7pc of the world’s population, and 25pc of its GDP, and yet it also accounts for a massive 50pc of its welfare spending.

The point is an important one. Europe’s welfare spending is out of control, and is on a scale that is both lavish and unaffordable compared with the rest of the world. There is a problem, however. Neither she, nor any other political leader in Europe, has the will to do anything about it.

Eurostat, the statistical agency of the European Union, has this week published updated figures on the total welfare bill across Europe. It is rising, and in some countries is getting up to a quarter of national output. Meanwhile, the percentage of spending on stuff like infrastructure or education, which increase an economy’s potential output, is falling. 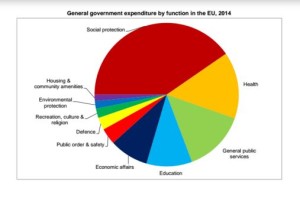 So long as that is true, it is very hard to see anything other than a bleak future for any of Europe’s economies.

If you dip into the blogs, there is a mildly entertaining debate about whether Merkel’s often-quoted figures are correct. On close inspection, it turns out that nations that make up the EU currently account for 7.2pc of the world’s population and a shade over a quarter of total output. When the World Bank crunched the numbers on social spending, however, it found that in fact Europe accounts for a massive 58pc of global welfare spending.

What is certainly true is that Europe’s welfare budget has turned into a juggernaut that is careering out of control.

On the World Bank data, the United States accounts for 18.8pc of global welfare spending, as you might expect from the world’s biggest economy. But Germany, around a third of its size, currently spends 12.5pc of the global total. France, a smaller country still, accounts for 9.9pc. The UK racks up close on 7pc. Contrast that with some far bigger, and faster- growing, countries. China, with 20 times our population, accounts for 2.4pc of the total. Russia accounts for 2pc and India just 0.6pc.n

According to Eurostat, the total cost of welfare across the EU now amounts to 19.5pc of total GDP, compared with 17.5pc as recently as 2006. If you restrict that to the eurozone countries, the total rises to 20.5pc. In Denmark and France it is now close on 25pc.

For all that the Left complains about austerity in this country, our total spending on social protection is only slightly below the European average at 16.5pc of GDP. In controversial areas such as disability benefits, where the Government has now abandoned some modest cuts, we are in line with the EU average, spending 2.8pc of GDP. (Our welfare bill is only less than average because a fantastic performance on job creation means we spend just 0.2pc of GDP on unemployment, compared with a eurozone average of 1.8pc, and 2pc in a country such as France).

Overall, in almost every country, it is going up. With ageing populations, that is hardly likely to decrease – poverty-stricken Greece is now spending 15pc of GDP on pensions, and Italy 14pc. Europe is literally drowning under the cost of its welfare bills.

At the same time, spending on the things that might make the economy more productive is actually going down. Take infrastructure. Total spending on that across the EU has dropped to 2.7pc of GDP. The three biggest countries in the eurozone – Germany, France and Italy – have reduced their infrastructure spending by between 15pc and 20pc over the past decade.

That compares badly with the rest of the world. The United States is often criticised for the state of its airports and roads. But it is now spending 3.4pc of GDP on infrastructure. Japan is now spending 3.6pc. Europe spent plenty of money in the past, so there is a rich legacy of buildings, bridges and transport links. But if you don’t keep repairing those things, and don’t keep building new ones, they go into decline very quickly. Or take education. Spending on that is either stagnant or declining right across Europe. In Italy, for example, it has gone down from 4.6pc of GDP to 4.2pc since 2007. And yet all the evidence suggests higher spending on education improves the level of human capital and makes the economy more productive very quickly.

Across the EU, welfare spending is three times the total spending on the next biggest expense, healthcare, which accounts for just over 7pc of the total. At the same time, spending on things that might actually improve its long-term competitiveness is going down.

Of course, it is important to have welfare systems in place so that those in need are looked after. It is one of the hallmarks of a civilised society. No one wants to see the disabled left to fend for themselves or allow pensioners to remain in poverty. The trouble is that welfare spending is pure consumption. It does not represent any kind of investment and it doesn’t pay for itself. The money for it has to be found from the productive part of the economy, and it has to be raised somehow – the more you spend on it every year, the more you have to tax or borrow to keep the books in balance.  At a certain point, it becomes a drag on the productive economy.

There are too few people producing stuff, and the levels of tax they are required too pay are too high to keep them motivated. You can debate where that point is, but a limit has to be set somewhere and at some point it has to stop rising.

Merkel gets many things wrong. But she is right about the levels of welfare spending being far too high. Until that starts to change it is hard to feel optimistic about the prospects for the European economy.