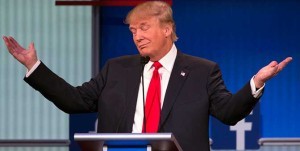 TOKYO (AP) — Japan’s government says it will stick to its policy of not possessing nuclear weapons, after U.S. presidential hopeful Donald Trump said he would be open to the idea of Japan and South Korea having their own atomic arsenals.

Trump said in an interview with The New York Times published Sunday that asking Japan and South Korea to pay more for their own defense “could mean nuclear.”

He said the issue “at some point is something that we have to talk about.”

A South Korean Defense Ministry spokesman said he had no comment on Trump’s remark.

Here’s how some have been following Trump’s comments on Twitter:

Did Obama sign Israel’s death sentence? Iranian officials call Israel a “One bomb State” because it can be destroyed with one bomb

"140,000 expected victims in a Nuclear war, Obama could have prevented this . The quantity of casualties killed in a...