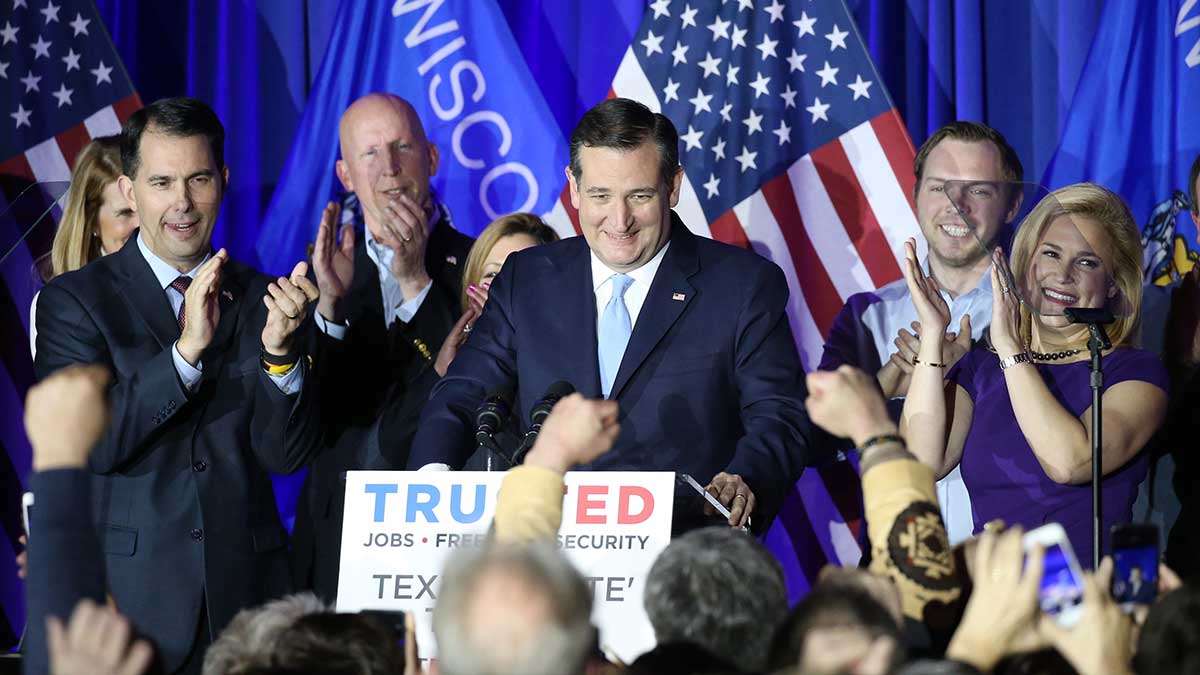 U. S. Presidential Republican candidate Ted Cruz speaks to reporters after winning the Wisconsin Primary in Milwaukee , Wisconsin, on April 5, 2016. The Texas senator rolled to a landslide victory over the Republican front-runner Donald Trump. ( The Yomiuri Shimbun via AP Images )

To listen to some tell the story of the Wisconsin primary, it would seem like Donald Trump was never competitive in the Badger State.

His supporters argue that the demographics of Wisconsin, an overwhelmingly majority white state with a strong, proud history of working class manufacturing families, were somehow not favorable to Trump.

What the Trump camp doesn’t want to admit is that Wisconsin proves Cruz’s primary theory true. For weeks, Cruz has posited that if the field winnowed and voters were asked to pick between Cruz and Trump, voters would choose Cruz.

And, indeed, they are.

The momentum of the race didn’t shift last night for Cruz; it began shifting once the field collapsed and voters could see the clear differences between Trump and Cruz.

After Marco Rubio lost his home state of Florida in the March 15 primary and exited the race, Utah was the first grand test of the theory.

Cruz claimed 69.2 percent of the votes in the Beehive State and claimed all 40 delegates; Trump only earned 14 percent and walked away with none.

The second major test was Wisconsin, where Cruz bested Trump 48.3 percent to 35.1 percent. Even while John Kasich remains in the race, handicapping Cruz.

In between those contests, was further proof of Cruz’s strategy.

In the Arizona primary, very firm ground for Trump, the real estate mogul won with 47 percent of the vote, but The Washington Examiner reported on Monday that a substantial number of delegates would be ready to vote for Cruz should they become unbound at an open Republican convention in July.

Last weekend, Cruz picked up even more delegate support in North Dakota. CNN reported that 18 of North Dakota’s 25 delegates selected by the state party are in the Cruz camp.

The momentum of the race didn’t shift last night for Cruz; it began shifting once the field collapsed and voters could see the clear differences between Trump and Cruz.

To believe that Wisconsin was never winnable for Trump would mean to ignore all his actions in the run-up to the primary.

Trump once had a commanding 11-point lead. He packed his schedule with campaign events. He deployed surrogates.

But, then he tanked in the polls. Seats were left unfilled at his rallies. One of his top surrogates, former GOP vice presidential candidate Sarah Palin, was greeted with “tepid applause and stone-cold silence” during a Lincoln Day Dinner speech.

Meanwhile, Cruz did just what he said he would do: coalesce Republicans behind his candidacy. Two of Cruz’s former primary rivals, Scott Walker and Carly Fiorina, provided the Texas Senator with a tremendous amount of support.

Before the Wisconsin primary results were tallied Trump promised voters a “big surprise.”

Two Republican senators opposed to the Iran nuclear deal are trying to block an Obama administration proposal that would ease...