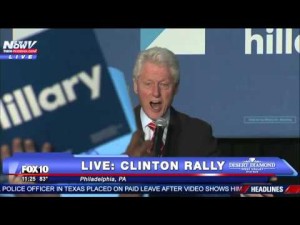 The Black Lives Matter organization just loves to target people with cries of racism.  It’s pretty much a given that a radical race-baiting outfit would launch such accusations against virtually every Republican, but it’s been somewhat surprising that they’ve done the same to prominent Democrats.  Earlier in his campaign, Bernie Sanders faced their wrath and, more recently, Hillary has too.

Fearful of alienating the black voters they take for granted, both Dem candidates have done a tightrope-walking dance to try and distance themselves from the movement while still quietly embracing it. It hasn’t really worked, particularly for Hillary.

.And now it seems that her husband Bill has had enough. Yesterday, he tore into BLM protesters, accusing them of “defending people who kill the lives you claim matter.”  Take a look: (video below)

It’s not often you can say that Bill Clinton is completely right about something, but here we go. Black Lives Matter is nothing more than a nasty bunch of agitators who exploit jealousy and perceived inequality to further their goals. When their army of social justice warriors aren’t being overtly racist, they’re race-baiting, shouting down free speech, and demanding the nation subsidize their lives.

Sadly, Bill’s moment of clarity was short-lived. Immediately after this clip, he went back to his revisionist history, his standard talking points about evil Republicans, and his blather about how the “supreme court elected George Bush.” But, for one brief moment, he had it right. We’re sure, should a closet-socialist like Hillary get elected, she’ll do everything she can to give BLM everything it wants, and we may have to cross that bridge if we come to it.

For the moment, though, just sit back and enjoy the sight of a left-wing mob trying to one eat its own.

In Case You Missed It:  FDA exposed as a criminal body parts cartel involved in routine harvesting of organs from LIVING human babies
Posted in Freedoms and tagged blacks, Clinton, Crime, Democrats.

No gap between political correctness and insanity

By Jeff Crouere The United States of America in 2016 is a country in deep trouble. We are facing severe...