Thousands of migrants are pouring into Sicily by sea every day, sparking fears that the ancient Mediterranean isle has become ‘the new Lesbos’. 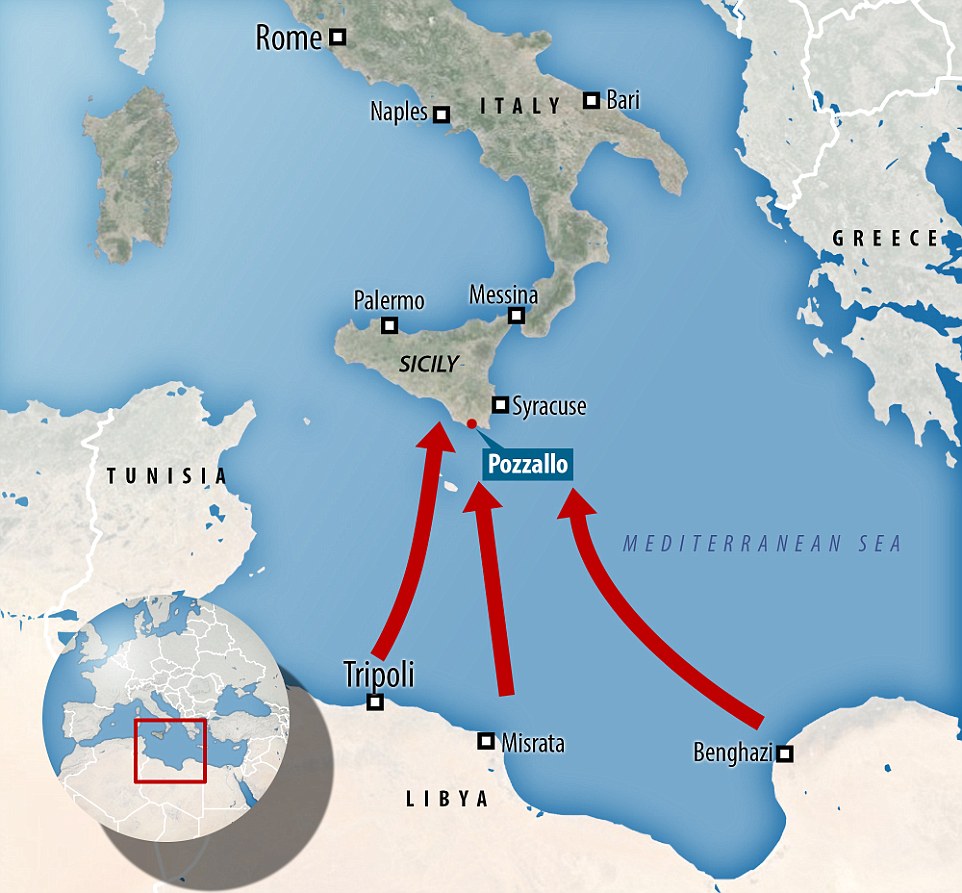 Arrivals to the island have increased by 90 per cent in the first three months of the year. In the last three days alone, more than 6,000 migrants have arrived on its shores.

Aboard a Norwegian rescue ship that brought 900 migrants to the Sicilian port of Palermo. Thousands more, who had all been picked up on the Mediterranean, were taken ashore simultaneously at other ports on the island.

Official figures show nearly 20,000 migrants have arrived in Italy by sea since January, compared to just 10,000 during the same period in 2015. Almost 90 per cent landed in Sicily.

Last night, the migrants were rescued just 30 miles off the coast of Libya by state-of-the-art European military vessels, which had sailed 750 miles to pick them up.

They underwent health and identity checks while being ferried to Sicily. One navy officer dubbed the process a ‘taxi service’.

When the orange Norwegian ship opened its doors, hundreds of West Africans filed ashore and were given sandals, tracksuits and food packages before being loaded onto buses and taken to reception centres known as ‘hot spots’, under police guard.

Astonishing footage showed a Norwegian soldier ‘high-fiving’ the new arrivals as they filed off the ship, wrapped in bright orange blankets to keep them warm.

Among them were 25 women and three children. The vast majority were men, including one who was seriously ill and one teenager who was wheelchair-bound and blind.

‘There are no jobs for me back home,’ Christian, a 23-year-old baker from Ghana, said he waited in the queue to be processed.

‘I tried to get work in Libya but it didn’t happen, so I had no choice but to try Italy, even though my girlfriend is pregnant with our first child.’

Joe, 39, a father-of-two from Nigeria, said that his life was not in danger back home. ‘There are no Boko Haram in my area,’ hesaid, ‘but there are no jobs or work at all.’

An unnamed man from Ghana said: ‘I started my journey from Ghana. I came to Libya – I went there to work. To make my money to travel to Italy.

‘I thought I could make a lot of money in Libya. Libya was rough.’

The migrants were to be dispersed around the country in an effort to ‘share the burden’ and encourage integration, while preparations were made to receive the next shiploads of migrants the following day.

‘Since last Thursday, my ship has transported 1,650 migrants here,’ said Torger Brenden, 45, commander of the Siem Pilot, the vessel which ferried the migrants to safety.

‘That is the population of a small town in Norway, brought here by one single ship in one single week – and the migrant season hasn’t even started yet. It is overwhelming.’

The migrants, he added, had gone to sea in dinghies with a single air chamber – meaning that one hole would cause the boat to sink – and without life jackets or basic safety equipment.

In the fear and panic migrants often started queue-jumping, which led to fights that threatened to capsize the flimsy vessels.

‘It may be true that our presence is encouraging more migrants, but it’s not my job to talk about the big political picture. Saving almost 1,000 lives in one day is definitely a good day at the office,’ he added.

The authorities are feeling the strain. Recently, Médicins Sans Frontières, the global NGO, pulled out of the migration magnet Pozzallo because the soaring demand and limited resources had made it impossible for the team to carry out its job.

The UNHCR stresses that Sicily is, so far, much less chaotic than in Lesbos, and migrants are still being absorbed systematically.

The Italian island is the largest in the Mediterranean, so the effect on the local population is cushioned.

But the spike in numbers is alarming, with approximately 6,000 arriving in the last three days.

‘This hasn’t been happening every day in the last month, and it is too early to say if the trend will continue. But we are definitely in a state of emergency,’ a spokesperson said.

The surge in arrivals may be due to the renewed fighting in Libya, the closure of the Balkan route or the arrival of better weather.

The Siem Pilot was part of an international operation to rescue 17 dinghies about 30 miles off the coast of Libya.

Seven of the boats were unloaded onto this vessel, while the remaining 10 were rescued by Maltese, Romanian and Italian ships.

A total of 270 were taken to Pozzallo, a small port town in southern Sicily which has received the highest number of new arrivals this year.

The vast majority of the migrants arriving at Sicily are African. Those aboard the Siem Pilot, huddled in orange blankets and clutching regulation packages of food, were from Nigeria, Ghana, Gambia, Niger, Ivory Coast and Benin.

Many believe that the closure of the Balkan route through Greece will force Syrians to brave the dangerous sea passage to Italy, which would multiply the numbers of newcomers.

Donald Tusk, president of the European Council, warned that the EU-Turkey deal would magnify pressure on Sicily. After closing the Balkan route, he said, the focus must move to the ‘central European route’.

‘We must get ready to show solidarity with Italy and Malta,’ he said. The coming spring and summer months – known as the ‘migration season’ – are likely to exacerbate the situation, with fair weather encouraging more migrants to attempt the hazardous journey.

The last time that large numbers of Syrian migrants were recorded in Sicily was in 2014, before their focus moved to the more accessible Balkan route.

‘We think the Syrians are taking some time now to arrange a new route from Turkey to Sicily,’ said Commander Brenden. ‘Next month is when we really think the problems will start.’

Switzerland has announced it is considering stationing a tank battalion at its southern border with Italy, after news that Austria is ready to completely shut down the Brenner Pass between Italy and Austria.

In a matter of just hours, Europe’s migrant crisis has escalated following the unexpected announcement Wednesday night by Austria’s Defense Minister Hans Peter Doskozil that his country is prepared to close its border if Italy does not get its migrant problem under control.

After Italy sharply criticized the Austrian plan, Switzerland has declared it is considering posting tanks to secure its own border with Italy. “We expect a significant increase in the number of refugees this summer. If Austria now closes off the Brenner Pass, Switzerland will become the only gateway to Northern Europe. Before that, we have to protect ourselves,” said Norman Gobbi, the security director of the Swiss Canton of Ticino.

The region has some 2,000 soldiers of the Swiss Tank Battalion at the ready, and they have been asked to postpone vacations in order to be available as needs may arise. As other migrant routes become more restricted or close altogether, Italy is becoming increasingly the path of choice for migrants coming both from the south and from the east. Heading north through Italy, if Austria no longer becomes an option, “many will then travel to Switzerland,” Gobbi said.

According to Gobbi, in the past week 169 refugees have crossed the border between Italy and Switzerland illegally. “The refugees mainly take routes outside of the official border crossings. We must prepare ourselves for a possible migrant onslaught,” said the security director.

During the first part of this year Italy has taken in 50 percent more refugees than during the same period in 2015, and the Italian government is forecasting the total number of migrants this year to be double that of last year. “This will not be without consequences for Switzerland,” said Gobbi.

“We have to go on the offensive,” said Austria’s Defense Minister Wednesday night, referring to tightened border controls.

By all accounts, Switzerland agrees.

In Case You Missed It:  Get Ready for the Economic Collapse
Posted in Terrorism and tagged Austria, Europe, Illegal Immigration, Italy, Migrants, Switzerland.

Ukraine’s parliament Thursday confirmed the appointment of Volodymr Groysman as premier in a 257 to 50 vote replacing Arseniy Yatsenyuk....