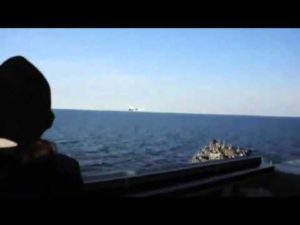 If you’ve been watching the news over the course of the last 24-48 hours, you’ve no doubt seen the propaganda about Russian SU-24 attack planes buzzing the USS Donald Cook (DDG-75).  This happened first on Monday, then again on Tuesday.

The US the media propaganda must want to start a war between the US and Russia? I can understand the desire to increase ad revenue and get more people to watch TV, but a global nuclear war is probably not the best way to achieve that.

The USS Donald Cook was just 38 Nautical miles off the coast of Russia, just 26 Nautical miles outside Russian waters. Sailors aboard the US ship described the Sukhoi Russian Su-24 as “wings clean,” meaning there were no visible bombs or armaments on the aircraft, the defense official said.

Here’s an idea. Maybe, umm I don’t know …Stop provoking Russia! USA builds up a presence right on the Russian doorstep and constantly vilify them for no reason at all especially when they seem to be the only ones who give a damn about destroying terrorists in the middle east. What if they did the same in the Gulf of Mexico?

Maybe if US warships weren’t 38 Nautical Miles from the Russian borders there would not be Russian jets flying near the bridge of US Navy ships?

Judging by the videos released by the US Navy, the sailors were nonplussed by the Russian aerobatic skills. They gathered on the top deck of the destroyer to watch the Russian pilots.

In Case You Missed It:  VIOLENCE IN HOSPITALS: Mass shootings barely compare to the medical violence routinely inflicted by many surgeons and doctors
Posted in Freedoms and tagged Military, Russia, United Socialist States of America.

NEW Lesbos’: Now Sicily is flooded with 2,000 migrants EVERY DAY since the Balkans route shut

Thousands of migrants are pouring into Sicily by sea every day, sparking fears that the ancient Mediterranean isle has become...