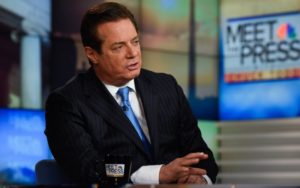 We have posted before about how Trump would be dangerous for Israel.  Now, Trump makes another anti-Israel move by hiring Paul Manafort as one of his top aides.

From The Daily Beast:

One of Donald Trump’s top aides once lobbied Congress to kill an effort to move the United States embassy from Tel Aviv to Jerusalem.

Paul Manafort, the aide dubbed Trump’s “new right-hand man” and his point-person on delegate strategy at the coming Republican convention, worked the corridors of power in Washington for the Saudi government in the 1980s.

The promise of moving the American embassy to Jerusalem has been a mainstay of political appeals to the pro-Israel community for many years. But in 1984 Manafort lobbied on behalf of the Saudis against House and Senate legislation that would have pressed the U.S. government to make this move, according to a Foreign Agents Registration Act disclosure, which requires that lobbyists working for foreign governments publicize their work.

For work in the six months preceding December 1984, Trump’s new delegate wrangler was paid $200,000—which, taking into account inflation, would be worth more than $450,000 today.

Manafort’s work for the Saudis could put his boss in hot water on this issue yet again. Trump opponent Sen. Ted Cruz, on the other hand, has co-sponsored legislation to press the president yet again to move the U.S. embassy in Israel.

Manafort’s ties with the Saudi government also conflict with his new boss’s suggestions earlier this year that the Saudis were involved in the 9/11 terrorist attacks. “Who blew up the World Trade Center? It wasn’t the Iraqis, it was Saudi—take a look at Saudi Arabia, open the documents,” Trump said in February, in an apparent reference to the 28 redacted pages in from 2003 Senate report on the 9/11 attacks. A 60 Minutes report this week suggested the possibility of a Saudi support network for the terrorist hijackers while there were in the United States, bringing the issue yet again into public view.

The Trump campaign did not immediately respond to a request for comment.

Manafort’s work for the Saudis didn’t stop with his lobbying on the location of the U.S. embassy in Israel: His work was evidently sufficient for him to maintain the client. Throughout 1985, he was paid to advise the Saudi government on U.S. arms sales to the Saudis, energy policy, and America’s relationship with Saudi Arabia more broadly. For this Manafort was paid more than $300,000, or more than $660,000 in current terms.

And in the first half of 1986, Manafort lobbied the Reagan White House, the State Department and Congressional staff on a proposed arms sale to Saudi Arabia, netting him a quarter-million dollars—which today is worth more than half a million.

We know that Trump has gone back and forth on this issue.  Early in his candidacy, Trump spoke candidly before Jewish Republicans that he would not move the embassy to Jerusalem and Trump would not acknowledge Jerusalem as the capital of Israel.  Recently at the AIPAC convention, Trump gave a speech that appeared to be with prepared remarks.  He reversed course by stating he would move the embassy to Jerusalem.

Maybe the easy answer is that Manafort has just changed his position just like Trump has done on this same issue.  However, would that be the correct answer?

This information from Glenn Beck is good for the voting public to find out.  We have heard over the years...