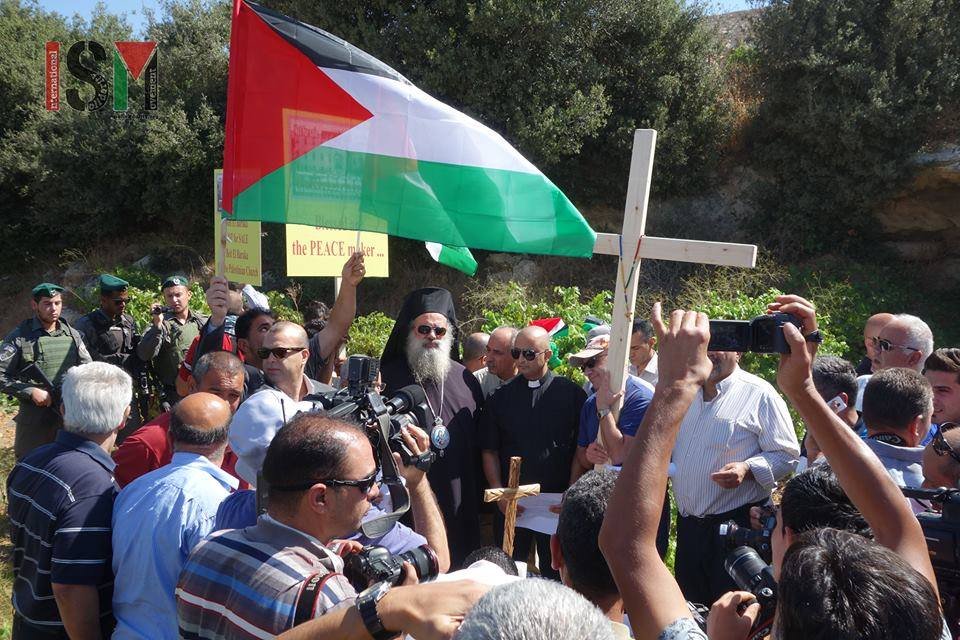 Bethlehem’s Christian Arab leaders lobbied Israel against transferring the city to the Palestinian Authority. Thus, in 1993, on the eve of signing the Oslo Accord, the Christian mayor of Bethlehem, Elias Freij, urged Israel’s Prime Minister Rabin to annex Bethlehem into Greater Jerusalem – as it was under the Ottoman, British and Jordanian rule of the area – predicting that “transferring Bethlehem to the Palestinian Authority would relegate it to a town of many churches, but devoid of Christians.”

Since the 1993 establishment of the Palestinian Authority, the Christian majorities of Ramallah – Mahmoud Abbas’ headquarters – Bethlehem and Beit Jala have been transformed into insignificant minorities, due to physical, social, economic, legal and political intimidation. More Christian emigrants from these towns reside in Latin America than Christians remaining there.

The violent discrimination of Christians has been a systematic feature of the Muslim/Arab societies.  For instance, in Saudi Arabia, Christians were murdered, expelled or converted until the 10th century. Currently, non-Muslims cannot become Saudi citizens and Christians working in – or visiting – Saudi Arabia are not allowed to worship, or display Christian items (Bibles, crucifixes, statues, carvings, etc.), openly.

While the Egyptian President, General Sisi, has attempted to minimize the traditional intimidation of Egypt’s Coptic Christian (10%) minority – which possesses ancient Pharaonic roots – the abduction of Coptic females has been routine and Copts face deep-seated discrimination in all walks of life.  Moreover, conversion to Christianity is prohibited under Islam. While physical assaults on Coptic communities were a daily occurrence during the brief rule of the Muslim Brotherhood, it has become a monthly event under General Sisi….

The persecution of Christians in Arab lands is based on the teachings of Muhammad, which dominates the social, political, cultural, judicial, military and educational aspects of the Muslim Middle East. Therefore, the political establishments in the Muslim/Arab countries are not secular in the Western sense. According to the Quran, Jews and Christians – “the people of the book” who rejected Islam – transgressed egregiously, were the enemies of God, were rejected by God, causing Judaism and Christianity to be replaced by – and subordinated to – Islam, the only legitimate and inherently supreme religion.  Islam commands Muslims to pursue the domination of the “House of Islam” over the “House of the infidel,” which includes Christians. Hence, the centrality of Jihad, the holy war.

A typical reference, by the Quran, to Christians and other “infidels,” appears in Surah (chapter) 5, verses 60 & 86: “God cursed and blustered those whom he transformed to apes [Jews] and pigs [Christians]…. The infidels shall inherit hell….”

In fact, the legalized-persecution and scapegoating of Christians are in accordance with the Muslim concept of “Dhimmis,” who are the non-Muslim citizens in Muslim lands.  As stipulated by the Islamic code of law (the Sharia’) they are subordinated to, and protected by, Islam, as long as they accept Islamic supremacy. The attitude towards the Dhimmis is specified in the Quran, Surah 9, verse 29: “Fight the people who received the book [Jews and Christians] – who do not adhere to the truthful religion [Islam] – until they pay the Jizya [“infidel” tax], while they are humiliated.”  Non-Muslim citizens are faced with three choices: conversion to Islam, accepting Dhimmitude or death/execution.

In Case You Missed It:  I'm Banned from the US for 'Association with a Terrorist Organization'

Since the 1683 defeat of the Ottoman Empire at the gates of Vienna, Islam has declined dramatically, witnessing the rise to global domination by the “infidel, inferior and arrogant” Christian world, and alarmed by the penetration of “infidel” ideologies and values into the Abode of Islam. This perceived-humiliation has led to tectonic eruptions of Islamic rage and terrorism, aimed at regaining the, supposedly, inherently supreme, megalomaniacal status of Islam.

Also, the Islamic religious and political establishments consider the “infidel” Christian/Western modernity and civil liberties clear, present and lethal threats, which fuel endemic domestic instability. Furthermore, the recent erosion of Western posture of deterrence, as well as the Western appeasement and retreats have provided a tailwind to the Islamic surge, fueling the anti-Christian/Western Islamic rage, in spite of the generally pro-Arab Christian/Western policy (including the US arms embargo during Israel’s War of Independence, while the British supplied arms to the Arabs; punishing Israel for destroying Iraq’s nuclear reactor; pressuring Israel to re-divide Jerusalem; President Obama’s courting of Muslim regimes and condemnation of Prime Minister Netanyahu’s policies).

While most of the Christian/Western world pressures Israel to accept Palestinian demands, a common battle cry in Palestinian Authority-inspired rallies is: “After Saturday comes Sunday,” which communicates a Muslim warning to Christian minorities throughout the Arab World: Muslims will do away with Christians after they have dealt with the Jews!

As befits the fate of Dhimmis, churches, convents, monasteries, Christian cemeteries, schools, homes, land and Christian women in the Palestinian Authority are subject to desecration, destruction, burning, confiscation, intimidation, rape and harassment. For example, in April-May, 2002, Bethlehem’s Church of the Nativity – with its priests and nuns – was hijacked, looted and booby-trapped, for 39 days, by 200 Palestinian terrorists.

In Case You Missed It:  I'm Banned from the US for 'Association with a Terrorist Organization'

The 1970-1982 PLO/Palestinian terror surge in Lebanon accelerated the flight of Lebanese Christians, reducing them from the ruling sector to a dwindling minority. Since 1993, the Palestinian Authority intimidation of Christians has intensified the flight of Christians.  However, the Vatican and most Christian/Western governments have – knowingly – sacrificed the religious and civil liberties of Christian minorities – and their very existence – on the altar of wishful-thinking, political correctness and appeasement.

Ambassador (Retired) Yoram Ettinger is an insider on US-Israel relations, Mideast politics and overseas investments in Israel’s high tech. He is a consultant to members of the Israeli Cabinet and Knesset, and regularly briefs US legislators and their staff. His OpEds have been published in Israel and the US he has been interviewed in both Australia and the U.S. A graduate of UCLA and undergraduate at UTEP, he served amongst other things, as Minister for Congressional Affairs at Israel’s Embassy in Washington. He is the editor of “Straight from the Jerusalem Cloakroom and Boardroom” newsletters on issues of national security and overseas investments in Israel’s high-tech.

By Judi McLeod Are governments of the day—like those in the U.S., Britain, Canada, France, Germany and other European countries—gaming...