I was in Chemistry class in High School when 9/11 happened. I had already been studying Islam for several years at that point, and so my first thought was “Bin Laden” (as I knew what he was teaching) when the planes hit the towers. I also remembered hearing about how Muslims were dancing in the streets and on the rooftops in the Muslim areas in and aroun NYC. Several years later, this was confirmed by several friends and acquaintances in the area, and that especially in certain areas (one of them being Paterson, NJ), there was loud celebrating over what happened.

I say this because now that the Belgian Government is itself admitting that a “large number” of  Muslims were celebrating with dancing in the streets after the Molenbeek attacks,  this fact should be crystal clear- nothing will ever satisfy the Muslim communities in the West save our complete, utter, and irrevocable capitulation to their desire for our Islamization.

They are celebrating the death of the West because they have no respect for life, and consequently no love of neighbor or even themselves.

They do not want mercy, only license.

They do not want justice, only vengeance.

There is nothing that we can do to solve this part of the problem because the Muslims themselves do not want it solved. Indeed, they expand their power base by keeping this problem alive.

This leaves the men of the western world two solutions: to return to Europe’s Christian roots and expel Islam and its followers from society like a dangerous cancer, or to abandon itself and embrace Islam and become a part of the Muslim world.

Which do you choose?

The Belgian Interior Minister, the Flemish nationalist Jan Jambon, declared, on Saturday 16 April, that “a significant part of the Muslim population danced when these attacks occurred”. He sees in this proof of the failure of the integration policy for foreigners in Belgium, he explained in this interview with the Flemish daily De Standaard.

This key figure in the Nouvelle alliance flamande (N-VA) [New Flemish Alliance] does not specify where he observed this dance, nor which attacks he is referring to. But he adds: “they threw stones and bottles at the police when Salah Abdeslam was arrested. That’s the real problem”.

“The terrorists, we can stop them, take them out of society. But they are only a pustule. Beneath that there is a cancer that is much more difficult to treat. We can do it, but not from one day to the next,” the minister continues, who says he is going beyond “politically correct thought” and “calling a cat a cat”.

He also explains that the “danger” linked to the radicalisation of young people from the third and fourth generations of immigration has now “taken root too deeply” in some districts, because Belgium “ignored the distress signals for years.”

After the attacks of 13 November, Jan Jambon created a controversy by promising to “clean up Molenbeek”, when it had appeared that several members of the commando teams that had struck Paris had come from this municipality which now has the reputation of being one of the main centres of jihadism in Europe.

Ivar Mol said Muslim children clapped their hands in both the Belgium capital and in the city of Antwerp after learning of the Islamic State (ISIS) attack.

He tweeted: “How do you teach when there is applause from the Muslim children in your class?” 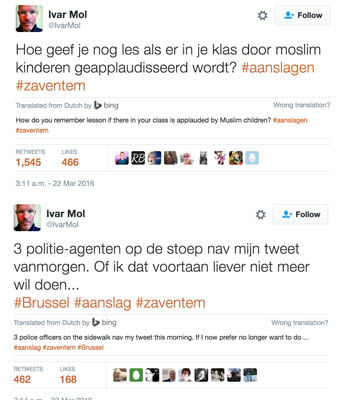 In Case You Missed It:  Get Ready for the Economic Collapse
Posted in Terrorism and tagged Belgium, Europe, Immigration, Islam, Migrants, Multiculturalism, murder, Muslims, Terrorism.

WARNING: Shocking Pictures Below: by Shoebat Foundation Images have surfaced on the Finnish image board ylilauta of adult Muslim migrants and their...