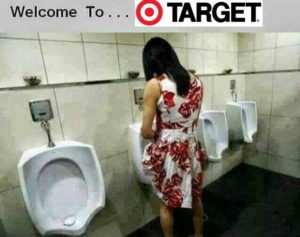 Target stores said inside it stores any person can go into any bathroom they please.  Our daughters, mothers, wife’s and grandmothers are now at risk as any pedophile or rapist can put on some lipstick and walk-into the girls bathroom at will inside Target.

When is enough enough, how far do we have to take political correctness even putting our children at risk? Understand this, anyone can enter any bathroom all they have to do is claim they are transgender.  This is an open invitation to rapist and pedophiles to lurk around in the bathrooms of their choosing, just simply state they are transgender. Target’s inclusive stance on transgender rights encourages sexual predators and puts women and young girls in danger, because “a man can simply say he ‘feels like a woman today’ and enter the women’s restroom.”

Under the guise of compassion and caring the progressive are putting our families at risk for less than 1% of the population who identify as transgenders.”’

A conservative Christian activist group has gained more than half a million signatures and counting from people pledging to boycott Target over its transgender bathroom policy.

Target made its position public in a blog post last week, stating that the company welcomes “transgender team members and guests to use the restroom or fitting room facility that corresponds with their gender identity.” The announcement comes as legislation on transgender issues in multiple states has spurred several major corporations and businesses to take a stance on LGBT rights.

Liberals think if you want to be a woman (or a man) you can be one by pretending to be one, and if you can get enough people to agree with you: it’s true. And anyone who disagrees is a bad.

Anyone may wake up one day and decide “hey” I want to be an cat. And if they have enough money, I’m sure they can persuade a doctor to give me cat hormones and implant a whiskers onto their faces like Dennis Avner did. But guess what he is not cat no matter what he distorts his body to appear like.

The notion that a person constructs his or her own sexual identity is something at complete variance with genetic and biological reality. Somebody “constructing” a sexual identity doesn’t actually change one’s DNA. This basic science is something that is being conveniently lost in this national discussion.

Hundreds of abusers rushing into gender neutral bathrooms by the dozens, the question I keep asking myself is, “What if just one little girl gets hurt by this? Would that be enough to make people reconsider it?” 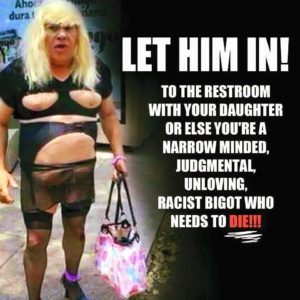 According to the American Psychiatric Association, until 1974 homosexuality was a mental illness. Freud had alluded to homosexuality numerous times in his writings, and had concluded that paranoia and homosexuality were inseparable.  Do we want these mentally ill people in the woman’s rest rooms?

Why is virtually no one asking how approximately less than one-(1) percent of our population has seemingly succeeded in changing the moral and legal landscape for 99% percent of the population? How did this change happen so quickly? It nearly mirrors the meteoric rise of Barack Hussein Obama from a virtual unknown to the putative President.

What a very large portion of the heterosexual population objects to is the appalling and aggressive effort of the transgender agenda and Target Stores anyone in any bathroom policy.

Liberal lunatics ask what harm could come to anyone if bathrooms are opened up to men dressed as women, or others who claim to be transgender? On the other hand, those who reject these policies ask why the nation should put women and children in danger by allowing predators to more easily enter and install video cameras in bathrooms and changing rooms or otherwise threaten and harass people using the restroom?

Target itself has had incidents of predators threatening children in its bathrooms. Only weeks ago such an incident occurred in a Cedar Park, Texas store.

There are dozens of such stories over the last 16 months or so highlighting the problem with setting policies like Targets that would make access to public restrooms easier for predators.

First up are five incidents in which predatory men were discovered committing criminal actions in public restrooms. Some of these men were arrested while dressed as women; others claimed to be transgender women.

Seattle Parks and Recreation is facing a first-of-a-kind challenge to gender bathroom rules. A 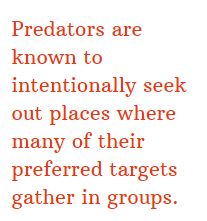 man undressed in a women’s locker room, citing a new state rule that allows people to choose a bathroom based on gender identity.

A man dressed as a woman was arrested in Virginia on Monday after police say he was caught peeping into restroom stalls three times in the past year.

Richard Rodriguez, 30, filmed a woman in a bathroom stall at the Potomac Mills Mall, Prince William County Police said on Tuesday. A 35-year-old woman was in the stall when she saw a bag moved toward her under the stall divider. Rodriguez apparently had been filming her, police said.

Jason Pomare was charged with six counts of unlawful use of a concealed camera for the purposes of sexual gratification, according to Sergeant Brian Hudson of the Los Angeles Sheriff’s Department’s Special Victims Bureau.

two Toronto shelters was jailed “indefinitely” last week after being declared by a judge a “dangerous offender.”

Pro-family leaders are pointing out that this is exactly the type of incident they warned of as the Ontario government passed its “gender identity” bill, dubbed the “bathroom bill,” in 2012.

The administration at the University of Toronto was recently enlightened on why two separate washrooms are generally established for men and women sharing co-ed residencies.

William Davis was charged in Smyrna with felony especially aggravated sexual exploitation of a minor.

A 24-year-old man was arrested Tuesday after a hidden cell phone was found recording video inside a Chapman University bathroom, police said.

A female employee told campus public safety officials at 1 a.m. Tuesday she had seen a cell phone while inside a unisex single-person restroom in the Leatherby Libraries, said Lt. Fred Lopez of the Orange Police Department. The bathroom is located on the first floor Rotunda Commons.

SAN JOSE – A private elementary schoolteacher accused of secretly recording people in the bathroom of his home was charged Wednesday with three misdemeanors, according to the Santa Clara County District Attorney’s Office.

Authorities say the arrest Thursday of 31-year-old Andrew Donahue of Campbell was not related to his role as a teacher at Challenger School in San Jose. Donahue has been charged with three counts of taking photographs or filming someone who is in a bathroom or in a state of privacy, according to prosecutor Luis Ramos.

Thomas Guzzi Jr., 36, of Pitman… is also charged with third-degree invasion of privacy for allegedly hiding a tablet computer in a bathroom stall at the theater to record video of others using the toilet. A video found on his computer allegedly revealed him installing the camera.

COLFAX, Wash. – A man was arrested after deputies believe he had been secretly filming multiple women using the bathroom. Court documents indicate the recordings were taken both in his home, as well as one of the alleged victim’s homes. The recordings dated back several years, according to court records.

Michael A. Novak was arrested as deputies arrived with a search warrant for his home. His alleged victim’s said they knew and trusted him. 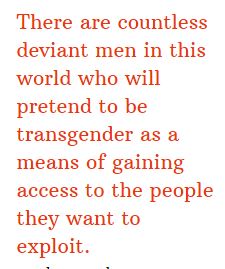 MIAMI – Beyond the outer walls of La Perla, inside the women’s bathroom, is where a customer said she found a recording device facing the direction of the restaurant’s toilet.

The woman was assisting her child in the bathroom off Southwest 152nd Street and Southwest 137th Avenue Saturday when, according to a Miami police report, she noticed a strange device tucked away under the sink.

The incident happened on March 18., after an alleged 14-year-old boy video-taped a 13-year-old student in the bathroom and forwarded the video to other students.

A Maryland volunteer teacher and choir leader charged with sexual abuse and child pornography directed children in sexually explicit videos filmed in a school bathroom, according to court documents released on Tuesday.

A security guard at a Long Island high school has been arrested, accused of taking video of a student going to the bathroom and posting it to Snapchat, police say.

Police said at a news conference Wednesday that the guard at Roosevelt High School followed the 16-year-old boy into the bathroom and videotaped him in the stall from outside.

(MARTINSVILLE) – A former manager of the Martinsville Chili’s has been charged with allegedly videotaping eight women changing clothes or using the bathroom in the local restaurant’s restroom. His fiancée found the videos on a home computer and called police.

40-year-old Justin Carl Behnke of Indianapolis has been charged with 15 felony counts of voyeurism.

CORALVILLE, Iowa – A Johnson County man is accused of secretly videotaping dozens of men using the restroom at a Coralville business.

A victim came forward to police Sunday morning saying he was using a stall at Scheels Sporting Goods at Coral Ridge Mall when he saw a man take a photo of him.

LYNDHURST – The former fire captain and youth football coach accused of videotaping teen girls as they used his bathroom pleaded guilty Thursday to fourth-degree invasion of privacy, according to northjersey.com.

Earl Madison, a four-year, part-time employee of the YMCA of Southeast Missouri, is facing three counts of invasion of privacy in the first degree, according to the Sikeston Department of Safety.

According to court documents, the child said she saw a hole cut in a sleeve hanging in the bathroom.

When she looked closer, she could see a phone in the sleeve that was recording.

IOWA CITY, Iowa – UI Police Tuesday night said they had located the person of interest in connection with a man videotaping a woman while she was showering in a residence hall.

Barrow pleaded guilty to two counts of that offense around 10:30 a.m. He was sentenced to serve 30 years in prison.

Quarryville, PA, resident James Thomas Shoemaker, 19, was arrested last week when he was found hiding in a stall of the woman’s bathroom in the Sheetz store on Manheim Pike. Police said he was taking images of young girls on his cell phone. 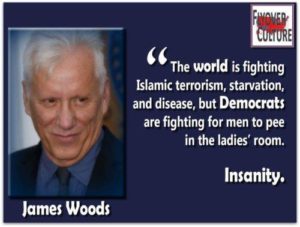 A man has been arrested after allegedly placing a hidden camera in a Starbucks bathroom in Brea, and recording at least seven adults, police said Tuesday.

The arrest of Melcher Carrilloalvarado, a 44-year-old La Habra resident, was announced a day after police said a woman had found the camera in a unisex restroom at a Starbucks located at 101 West Imperial Hwy.

With all these stories, it is also apropos to ask just how many Americans these transgender polices would affect. By even the most generous estimations only .3 percent of the nation claims to be transgender. So, in the end, these extreme policies of bending over backwards for people who claim to be transgender are designed for less than half of one percent of Americans.

In Case You Missed It:  A Commonsense Approach to COVID-19
Posted in Freedoms and tagged homosexuality, Liberalism, Political Correctness, rape.

Kevin Williamson on Why Conservatives Are in a Bad Mood

In an interview with The Daily Signal, author and columnist Kevin Williamson talks about why, like many other Americans, conservatives...