Judea-Samaria district police officers on Tuesday were stunned to find a 12-year-old Arab boy driving a car alone on Highway 60, in the region of Beit Haggai Junction heading in the direction of Kiryat Arba in Judea. 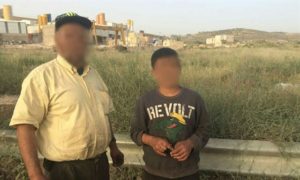 The boy was detained for a check, and his father was also checked after it was discovered that he was driving another car ahead of his young son.

A check on the police computer data banks found that the father had never applied for a driver’s license, and that police had previously ordered that the cars they were driving be kept off the road and disassembled because they were “safety bombs.”

The officers filled out a summons to court for the father and son, and the cars were towed to a police compound to be destroyed.

“We view this incident with great severity,” read a statement from the police.

“In a reality in which nearly every day people are killed on the roads, a father allows his minor son to drive in a car without a license, and on a major road that is a central route, and in cars that are not suitable to be on the road which are like a ticking safety time bomb.”

The statement concluded with a note of warning, saying, “the trip ended this time with a summons to justice, and only through great luck not with anyone wounded or killed.”

"Jihad in the UN: 57 Muslim tyrannies hijacked the UN to pass 20 anti-Israel resolutions vs only one for Iran, Syria...