Gaza’s ongoing sewage problem is getting worse, experts warn, and the consequences could have direct impact on the lives of Israelis 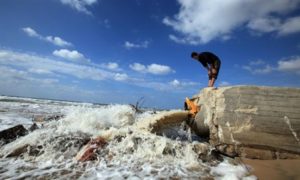 For decades, Gaza’s inadequate waste treatment system has been a burden both to Gaza residents and neighboring countries on the Mediterranean coast.

With a rapidly growing population, years of neglect have caught up with Gaza’s infrastructure, which has benefited little from regular transfers or building materials via Israel, or the massive international injections of cash to develop the area.

A waste treatment plant, built with $100 million of foreign aid, has been largely inactive. The Hamas terror group, which dominates the Gaza Strip, has failed to allocate electricity to operate the facility, letting raw waste simply dump into the Mediterranean or seep into the ground, polluting underground aquifers, harming the local water supply.

Hamas, which diverts much of the building materials flowing into the Strip for use in constructing terror tunnel networks along the Israeli and Egyptian borders, has done little to alleviate the situation.

While the new water treatment plant, if activated, could greatly improve the situation, the Hamas regime’s refusal to pay for electricity transfers has limited the power supply, which is shunted to other uses, including a series of luxury hotels. Bickering between Hamas and the Palestinian Authority government have hamstrung efforts to expand Gaza’s electricity supply.

A large portion of Gaza’s excess waste simply pours into the sea – at the rate of millions of gallons per day.

In recent months that overflow of raw sewage has reached southern Israeli beaches, shutting down Israel’s desalination plant in Askhelon on several occasions.

Gideon Bromberg, an environmental activist, warned that the flood of Gazan sewage into the Mediterranean could ruin Israel’s beaches, rendering them unfit for bathing. They would share the same fate of many Gaza beaches which have been contaminated and turned into festering waste dumps.

“There’s 101 different ways for these bacterium to be transferred,” Bromberg told AP.

New Balance Athletic Shoes, which manufactures some of its shoes in the United States, has recently been pushing Congress for...