There is something a bit unsettling about watching violent, foul-mouthed protesters waving the Mexican flag on American soil. 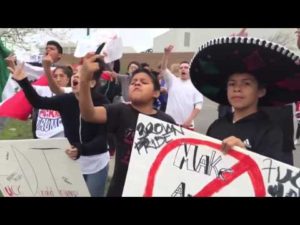 What kind of a parent would allow their child to behave that way in public?

A similar protest turned violent last week in Southern California – as a horde of illegals and their supporters violently attacked Trump supporters, police and even a horse.

Cole Bartiromo, identified by local media as a Trump supporter, needed a half-dozen stiches after the mob bashed open his head.

“Suddenly, out of nowhere I felt this thud in the front of my head,” Bartiromo told CBLA.com. “I started panicking – getting scared, thinking, ‘When are they going to stop? Are they going to kill me? I mean, these aren’t rational people.’”

One of the most disturbing images in recent days came from California – a small child – holding a sign. It read, “Make America Mexico Again.”

There was a time in this nation’s history when having 13 million people breach your border would have been considered an invasion. We used to fight wars over such a hostile act.

But these days instead of repelling the invaders, the Obama administration gave them food stamps, free health care, and a voter registration card.

We’ve been invaded and our government has provided aid and comfort to the enemy.

In both Indiana and California the protesters tried to bully and intimidate law-abiding Americans into silent submission. They tried – but they failed.

You see, the illegals need to understand something – “We the People” will no longer be silent. We will not allow our sovereignty to be violated anymore.

And more than anything, we are tired of lawmakers who refuse to defend American sovereignty.

The truth is we don’t know who or what has been coming across our southern border. We don’t know what dangers lurk in our neighborhoods.

And if I see one more foul-mouthed protester waving a Mexican flag on American soil – I’ll personally donate a pile of bricks to help build Mr. Trump’s wall.

Target’s stock has dropped and more than 1 million consumers have pledged to boycott the retail giant after it announced...