Former presidential candidate and Florida Governor Jeb Bush announced Friday that he will not vote for Donald Trump – but also ruled out voting in favor of Hillary Clinton, NBC News reported. 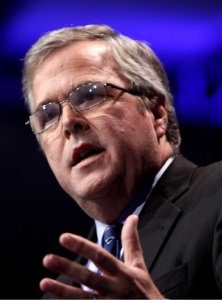 According to Bush, who had several run ins with Trump during televised debates, the presumptive GOP nominee is “not a consistent conservative” and has not showed the right “strength of character” for the job.

Bush wrote in a Facebook post that the president requires “great fortitude and humility and the temperament and strong character to deal with the unexpected challenges that will inevitably impact our nation in the next four years.”

“Donald Trump has not demonstrated that temperament or strength of character,” he added. “He has not displayed a respect for the Constitution. And, he is not a consistent conservative. These are all reasons why I cannot support his candidacy.”

At the same time, Bush also stressed that would not back Clinton, whom he described as an “untrustworthy liberal.”

When Bush was still in the running for the Republican nomination, he directly attacked Trump during the televised debates, but ultimately that did not help his campaign, which he suspended after several primary losses.

Shortly after suspending his campaign, Bush endorsed Texas Senator Ted Cruz, who dropped out of the race earlier this week, blasting Trump as “vulgar”.

His comments follow those of another 2016 contender, Lindsey Graham, who also said Thursday that he will not support Trump.

Graham, a South Carolina senator who mounted his own unsuccessful presidential campaign last year, said in a series of tweets that he will support neither Trump nor Clinton and will not attend this summer’s Republican convention.

University of Louisville: 5 million Muslims displaced due to WW1,the Austro-Hungarian occupation of Bosnia-Herzegovina, the Crimean War, Balkan wars, the Turkish war of independence

"Many displaced Muslims settled in the Jewish Homeland in the late 1800s, early 1900s. About five million Muslims displaced due to...