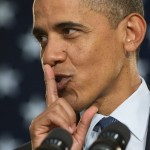 During the month of April, the Cass Transportation Index was down 4.9 percent on a year over year basis.  What this means is that a lot less stuff was bought and sold and shipped around the country in April 2016 when compared to April 2015.  The following comes from Wolf Richter…

Freight shipments by truck and rail in the US fell 4.9% in April from the beaten-down levels of April 2015, according to the Cass Transportation Index, released on Friday. It was the worst April since 2010, which followed the worst March since 2010. In fact, shipment volume over the four months this year was the worst since 2010.

This is no longer statistical “noise” that can easily be brushed off.

Of course this was not just a one month fluke.  The reality is that we have now seen the Cass Shipping Index decline on a year over year basis for 14 consecutive months.  Here is more commentary and a chart from Wolf Richter…

The Cass Freight Index is not seasonally adjusted. Hence the strong seasonal patterns in the chart. Note the beaten-down first four months of 2016 (red line): 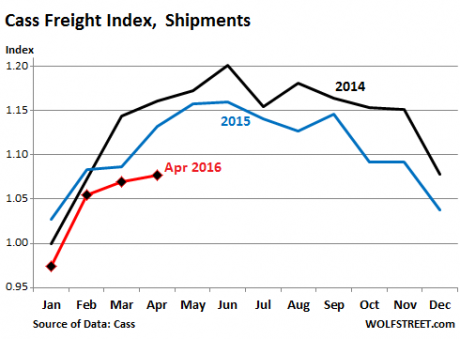 This is undeniable evidence that the “real economy” has been slowing down for more than a year.  In 2007-2008 we saw a similar thing happen, but the Federal Reserve and most of the “experts” boldly assured us that there was not going to be a recession.

Of course then we immediately proceeded to plunge into the worst economic downturn since the Great Depression of the 1930s.

Traditionally, railroad activity has been a key indicator of where the U.S. economy is heading next.  Just a few days ago, I wrote about how U.S. rail traffic was down more than 11 percent from a year ago during the month of April, and I included a photo that showed 292 Union Pacific engines sitting in the middle of the Arizona desert doing absolutely nothing.

Well, just yesterday one of my readers sent me a photograph of a news article from North Dakota about how a similar thing is happening up there.  Hundreds of rail workers are being laid off, and engines are just sitting idle on the tracks because there is literally nothing for them to do…

Intuitively, does it seem like this should be happening in a “healthy” economy?

The reason why this is happening is because businesses have been selling less stuff.  Total business sales have now been declining for almost two years, and they are now close to 15 percent lower than they were in late 2014.

Because sales are way down, unsold inventories are really starting to pile up.  The inventory to sales ratio is now close to the level it was at during the worst moments of the last recession, and many analysts expect it to continue to keep going up.

Why can’t people understand what is happening?  So far this year, job cut announcements are up 24 percent and the number of commercial bankruptcies is shooting through the roof.  Signs that we are in the early chapters of a new economic downturn are all around us, and yet denial is everywhere.

For instance, just consider this excerpt from a CNBC article entitled “This key recession signal is broken“…

Treasury yields are behaving as if they are signaling a recession, but strategists say this time it’s more likely a sign of something else.

The market has been buzzing about the flattening yield curve, or the fact that yields on longer duration Treasurys are getting closer to yields on shorter duration securities.

In the case of 10-year notes and two-year notes, that spread was the flattest Friday than it has been on a closing basis since late 2007. The yield curve had turned negative in 2006 and stayed there for months in 2007 before turning higher ahead of the Great Recession. The spread was at 95 at Friday’s curve but widened Monday to more than 96.

Treasury yields are very, very clearly telling us that a new recession is here, but because the “experts” don’t want to believe it they are telling us that the signal is “broken”.

For many Americans, all that seems to matter is that the stock market has recovered from the horrible crashes last August and earlier this year.  But in the end, I am convinced that those crashes will simply be regarded as “foreshocks” of a much greater crash in our not too distant future.

But if you don’t want to believe me, perhaps you will listen to Goldman Sachs.  They just came out with six reasons why stocks are about to tumble.

Or perhaps you will believe Bank of America.  They just came out with nine reasons why a big stock market decline is on the horizon.

To me, one of the big developments has been the fact that stock buybacks are really starting to dry up.  In fact, announced stock buybacks have declined 38 percent so far this year…

After snapping up trillions of dollars of their own stock in a five-year shopping binge that dwarfed every other buyer, U.S. companies from Apple Inc. to IBM Corp. just put on the brakes. Announced repurchases dropped 38 percent to $244 billion in the last four months, the biggest decline since 2009, data compiled by Birinyi Associates and Bloomberg show. “If the only meaningful source of demand in the market is companies buying their own shares back, then what happens if that goes away?” asked Brad McMillan, CIO of Commonwealth “We should be concerned.”

Stock buybacks have been one of the key factors keeping stock prices at artificially inflated levels even though underlying economic conditions have been deteriorating.  Now that stock buybacks are drying up, it is going to be difficult for stocks to stay disconnected from economic reality.

A lot of people have been asking me recently when the next crisis is going to arrive.

I always tell them that it is already here.

Just like in early 2008, economic conditions are rapidly deteriorating, but the stock market has not gotten the memo quite yet.

And just like in 2008, when the financial markets do finally start catching up with reality it will likely happen very quickly.

So don’t take your eyes off of the deteriorating economic fundamentals, because it is inevitable that the financial markets will follow eventually.

In Case You Missed It:  7 Big Moments in Congress’ Debate of Electoral College Vote for President
Posted in Financial and tagged Economy, Financial, Obamanomics, Recession, United Socialist States of America.

Why the Cancellation of ABC’s ‘Nashville’ Is Good for Taxpayers

There was some big news in the entertainment industry recently as the television show “Nashville” was cancelled after four seasons. As...