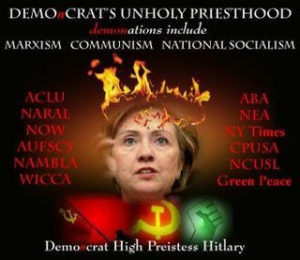 While Hillary Clinton, buoyed by biased left-wing buffoons in the mainstream media, is joyfully celebrating her historic feat in becoming the first female to represent a major political party as the presumptive nominee for the US presidency, those blessed with greater discernment and clear-thinking see Clinton’s victory as a contemptible affirmation of voter stupidity and lack of transparency, akin to that documented by MIT professor Jonathan Gruber in his enlightening revelations about passage of the ObamaCare fraud.

Specifically, mature, intelligent folks will take note of the fact that Hillary Clinton brings many undesirable “firsts” to this, the most tortured presidential campaign in US political history.

Indeed, Hillary is the first candidate:

Other than spouse William Jefferson Clinton, to be a certified congenital liar;

Who faces an FBI investigation and possible indictment for crimes against the United States vis-à-vis disregard for law in the handling of classified government documents;

Suspected of gross incompetence at a minimum and possible criminal negligence related to the death of four American diplomats in a foreign nation while serving in an official capacity as Secretary of State, AND the subsequent cover up of same in an presidential election year; and

Involved in a complex financial scheme involving hundreds of million of dollars which may have involved unlawful influence peddling by spouse William Jefferson to foreign leaders.

So while it is true that Hillary has achieved some remarkable “firsts” in her career, it is also true that her resume includes many firsts unworthy of praise or emulation.

In short, Hillary Clinton has produced several blights on America’s political history…hers is a story that will hopefully not be repeated!

In Case You Missed It:  Cattle deaths explained? NASA warns of deadly magnetosphere “rifts” that allow intense solar radiation to wipe out large numbers of animals on Earth
Posted in Freedoms.

A few short miles outside of Washington, D.C., a public school community appears divided over a policy that allows transgender...