Agitators participating in a “Black Lives Matter” violent anti-police protest in Phoenix Friday ended it by throwing rocks at officers and threatening to kill them. 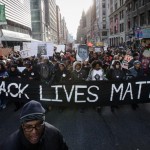 Meanwhile, a Donald Trump supporter was standing in the street and holding a sign for the candidate.

“I was standing in the street holding my ground and they started coming around me,” Matthew Meinecke said.

“And then I got cramped and everyone’s like cursing me like crazy and swearing and then I fell down to the ground.

“I was pushed to the ground and then I started getting trampled. That’s when the police pulled me out,” he said.

Holding up his ripped Trump sign, he said, “And then obviously this stuff happened. And it’s very, very insulting. It’s terrible.”

Other video shows Meinecke standing in the street has he’s surrounded. He ended up being pushed, before the sign is ripped out of his hands.

Police officers targeted by radical racist black groups throughout the country, Police say officers have been targeted in Missouri, Georgia, Arizona and Tennessee.

The attack in Tennessee occurred hours before the killing of five police officers in Dallas on Thursday night during a protest. The Tennessee Bureau of Investigation says the attacker told authorities that he was frustrated by the recent killings by police of black men in Louisiana and Minnesota.

Police have not disclosed a motive in Friday’s attacks in Georgia and Missouri, which have been described as ambushes.

In a fourth attack early Friday, a motorist fired at a police car as the officer drove by. In all, four officers were wounded. The officer wounded outside St. Louis is in critical but stable condition. The wounded officers are expected to survive.

A suburban St. Louis police chief says a motorist shot an officer three times as the officer walked back to his car during a traffic stop.

The Obama Administration has used the tragic shootings of young blacks to literally agitate the already inflamed passions surrounding both volatile incidents.

Yet how can we ignore the climate of violence that is sharpening conflicts instead of soothing them? How can we ignore a simple truth: Barack Obama created much of this atmosphere of anger, bitterness and bile with his disdain of whites and not too transparent belief and actions that we must now pay what are in effect reparations to the black community, even though this generation does not practice or 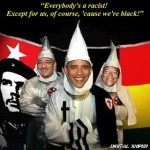 advocate slavery. Obama and his enablers, like Al Sharpton, have become what they accused President George W. Bush of being: a recruiting tool for terrorists thanks to his invasion of Iraq. Obama and company’s biased actions against whites, Christians and Jews have ironically served to draw neo-Nazis and sick Klansman out of their caves and have emboldened them to try to justify criminal acts – people like Dylann Roof. Indeed, Roof was quoted as saying that he struck because blacks had “taken over the country.”

To fundamentally transform America, Obama has been implementing Saul Alinsky’s and Frank Marshall Davis’ teachings. They have been inciting one group against another group, race against race and class against class.

President Abraham Lincoln warned that “A house divided against itself cannot stand.”

A Lesson in Affordable Living From Canada

How much more would cities grow if government regulations on construction were lighter and more predictable? New research from the...