Hillary Clinton used a CNN interview on Friday to completely embrace the Democrats’ claim that white people and cops must change to help reduce the number of African-Americans killed in tense exchanges with cops. 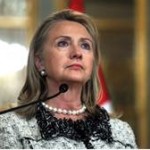 “I will call for white people, like myself, to put ourselves in the shoes of those African-American families who fear every time their children go somewhere, who have to have ‘The Talk,’ about, you now, how to really protect themselves [from police], when they’re the ones who should be expecting protection from encounters with police,” Clinton told CNN’s Wolf Blitzer.

“I’m going to be talking to white people, we’re the ones who have to start listening to the legitimate cries coming from our African-American fellow citizens,” she said.

“We’ve got to figure out what is happening when routine traffic stops, when routine arrests, escalate into killings … Clearly, there seems to be a terrible disconnect between many police departments and officers and the people they have sworn to protect,” she said.

“We’ve got to start once again respecting and treating each other with the dignity that every person deserves,” she said.

White Americans need to do a better job of listening when African Americans talk about the seen and unseen barriers you face every day.

To win in November, Clinton need a high turnout of African-American voters.

Neither Blitzer nor Clinton suggested that African-American communities have a role in reducing police-encounter deaths, which usually occur in tense engagements between a few cops and a few suspects with extensive criminal histories.

Clinton suggested that people who disagree with her agenda are racists. “There is so much more to be done… we can’t be engaging in hateful rhetoric or incitement of violence, we need to be bringing people together … we need more love and kindness.”

In Case You Missed It:  U.S. faces engineered famine as COVID lockdowns and vax mandates could lead to widespread hunger, unrest this winter
Posted in Freedoms and tagged blacks, Clinton, Election, Racism.

The Falcon Heights, Minnesota police shooting of Philando Castile is based around an entirely false narrative. Castile and Ms. Diamond...