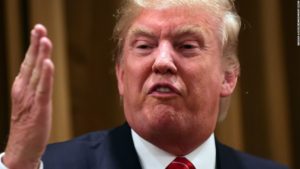 Rather than choke off a dangerous and lawless jihadist regime as they should, Americans are going to be stuck negotiating with terrorists for at least four more years, according to a Trump surrogate’s speech in Cleveland Monday night.

“To defeat Islamic extremist terrorism we must put them on defense,” said Giuliani during his rambling, largely-unhinged convention speech. “This includes undoing one of the worst deals America ever made – Obama’s Nuclear Agreement with Iran that will eventually let them become a nuclear power and put billions of dollars back into a country that the world’s biggest state sponsor of terrorism.”

“We must commit ourselves to unconditional victory against” jihadists, said Giuliani.

Sounds great, so I guess that means we’re scrapping it finally? Well, no.

Faced with a Trump/Clinton dichotomy, we’re going to be back at the table with Tehran once again IF WE’RE LUCKY.

Giuliani went on to promise that “Donald Trump will make sure that any agreement with Iran meets the original goals of the U.N. and our allies, and that is a non-nuclear Iran.”

The prospect of convincing the Mullahs to beat their heavy water reactors into plowshares by employing “The Art of the Deal,” may seem appealing, but let’s look at this open-eyed.

At least the speech, paired with similar promises from the campaign, at least provides some clarity to the confusion sown by months of inconsistent rhetoric from team Trump regarding deal. While the candidate has always been against the deal in some form or fashion, his approach to handling the international security disaster has vacillated from renegotiation to scrapping back and finally back to renegotiation.

Initially, in September, Trump said he would simply renegotiate the deal, which was ushered through the Senate by Republican leadership last summer.

“If we have to wait until the next president is sworn in to revisit this nuclear weapons agreement, then the next president better be someone who knows how to negotiate,” he said in an op-ed at USA Today. “When I am elected president, I will renegotiate with Iran — right after I enable the immediate release of our American prisoners and ask Congress to impose new sanctions that stop Iran from having the ability to sponsor terrorism around the world.”

By the time the American Israel Public Affairs Committee (AIPAC) conference rolled around in March, there was a brief and shining season where Trump told the crowd that his “number one priority” was to “dismantle the disastrous deal with Iran,” saying that it was “catastrophic for Israel—for America, for the whole Middle East.”

However, as of a couple of weeks ago, it seems that Trump is back to keeping the deal.

In an interview with the Daily Caller News Foundation, top Trump foreign policy adviser Walid Phares said that Trump is likely going to keep the deal in some form, saying “he’s not going to get rid of an agreement that has the institutional signature of the United States.”

“He’s said, so far that he doesn’t like this deal and that it was poorly negotiated,” Phares continued. “Once elected, he’s going to renegotiate it after talking through it with his advisers.”

“[He] is not going to implement it as is, he is going to revise it after negotiating one on one with Iran or with a series of allies.”

The renegotiation stance was, of course, echoed by Giuliani’s immediate pivot to talking about future deals after saying that the current agreement needs to be scrapped.

The problem with this, Andrew C. McCarthy explains at National Review, is that there should be no deal with the regime in the first place:

The JCPOA debacle is the result of being at the negotiating table in the first place. We gave the store away simply by sitting down, absent any conditions or changes in behavior, with a committed enemy of the United States, the world’s prime state sponsor of terrorism, while it was actively fueling anti-American jihadists, calling for “Death to America,” holding American hostages, threatening the annihilation of Israel, persecuting its own people, and developing nuclear power and ballistic missiles in violation of international law … Iran policy should not be about how to get a better deal. It should not even be about nuclear weapons — not primarily. The U.S. strategy on Iran should aim to suffocate the jihadist regime.

Faced with a Trump/Clinton dichotomy, America is going to be back at the table with Tehran once again IF WE’RE LUCKY. But even if a President Trump works out the most amazing, most unbelievable deal that you wouldn’t even believe, America is just going to continue with the Obama Doctrine tendency of opening doors to totalitarian, anti-American regimes who don’t even deserve the diplomatic time of day.

Given the choice between a liberal internationalist who helped lay the groundworks for the Iran Deal and a presumptive Republican nominee who appears to have finally landed at renegotiating it now that he’s won the primary, it looks like we’re stuck with the Mullahs, folks.

Nate Madden is a Staff Writer for Conservative Review, focusing on religion and culture. He previously served as the Director of Policy Relations for the 21st Century Wilberforce Initiative. A Publius Fellow, John Jay Fellow, Citadel Parliamentary Fellow and National Journalism Center alumnus, Nate has previously written for  The Washington Times, Catholic News Service, Patheos, and The Christian Post. Follow him @NateMadden_IV. – See more at: https://www.conservativereview.com/commentary/2016/07/giuliani-trump-iran-deal-convention-speech#sthash.tJSfcgSC.dpuf

After Nice, France Grapples With How to Combat Terrorism