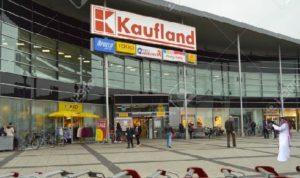 Jihad terror not seen in Munich since the Olympic slaughter of 1972. This time the targets are not Israelis, but ordinary residents. This carnage is what Merkel has brought upon her own people. The first duty of any state is to protect its own citizens from attack. Merkel has failed.

Several people are dead and injured after a shooting at the Olympia-Einkaufszentrum shopping mall in Munich, Germany, police said, sparking a manhunt for the shooter.

The suspect is at large, police spokeswoman Claudia Kunzel told ABC News. Kunzel could not confirm if there were one or more shooters.

The shooting began just after 6 p.m. in a McDonald’s in the mall. Police are still evacuating the building.

Police and firefighters are seen near a shopping mall amid a shooting on July 22, 2016 in Munich. Several people were killed on Friday in a shooting rampage by a lone gunman in a Munich shopping centre, media reports said.

Police in Munich, Germany respond to a shooting at a shopping center in Munich, Friday, July 22, 2016. Munich police confirm shots have been fired at Olympia Einkaufszentrum shopping center but say they don’t have any details.
All subway services in the city were halted after reports that the suspect fled into the subway.

Police ordered people around the shopping center to shelter in place.

UPDATE: Munich in lockdown: ‘Several dead’ and 10 injured in shooting rampage inside a shopping centre as police admit they don’t know where the gunman is or how many shooters there are,” Daily Mail, July 22, 2016: 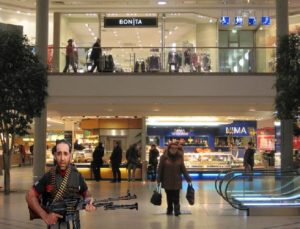 A number of people have been killed and another 10 people are injured after a gunman went on a shooting rampage.

Police operation is ongoing in Munich, with the force warning people to stay in their homes and avoid public spaces
Terrified shoppers were seen running for their lives from the Olympia Shopping Centre after hearing gunshots
Gunman reportedly fled after his shooting spree on the city underground network, which has now been shut down

By Anthony Joseph and Patrick Lion and Alan Hall In Berlin For Mailonline, 22 July 2016

Munich is in lockdown tonight as at least six people have been killed and 10 injured in a shooting rampage involving three gunmen.

A major police operation is ongoing in Munich, around the city’s Olympic Park, with the force warning people to stay in their homes and avoid public spaces as they admitted they don’t know where the gunmen are.

Terrified shoppers were seen running for their lives from the Munich Olympia Shopping Centre, in the district of Moosach, after hearing gunshots.

A video purporting to show the shooter, dressed in black, firing 20 shots has been posted on Twitter.

The footage shows him outside a McDonald’s directly outside the shopping centre.

The area around the Munich Olympia Shopping Centre, in the district of Moosach, has been sealed off as emergency services try to control the situation.

Police have confirmed that there a multiple deaths as a result of the incident and German media have reported there may be up to 15 killed.

Tonight, Munich police tweeted: ‘We currently do not know where to find the perpetrators. Watch yourself and avoid to be the public’.

A second shooting has taken place near Marienplatz subway station, which is just four miles from the Olympic Park area.

Munich Police said in a statement: ‘At around 5.50pm (local time) today there were witnesses who called the police and said there was a shooting at the Hanauer Street.

‘The shooting moved from that street to the shopping centre. The witnesses said there were three different people with weapons.’