It is possible the Iranian Muslim migrant and Munich killer lured German children to their deaths on Facebook? German Police probe fake ad for free food at massacre McDonald’s. 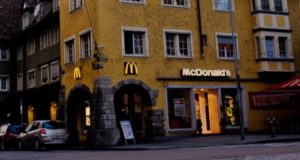 Police are investigating a fake Facebook advert which offered free food at the McDonald’s where a Muslim gunman killed the first of his nine victims.

A gunman shouting ‘Allahu Akbar’ opened fire at children in McDonald’s before rampaging through a shopping mall, killing at least eight people.

Munich was in lockdown for a major police operation around the city’s Olympic Park, after the 18-year-old Muslim Iranian opened fire at the fast food restaurant, before targeting shoppers in a busy mall in the district of Moosach.

The suspect was an 18-year-old German-Iranian dual national who lived in Munich, police told a news conference. As typical they are claiming his “motive is unclear”.

German authorities are searching for as many as three Muslim shooters who killed eight people and wounded several others in an attack in the Bavarian capital.

Jihad terror not seen in Munich since the Olympic slaughter of 1972. This time the targets are not Israelis, but...