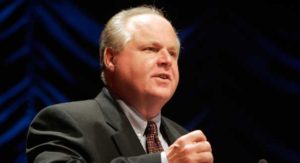 Rush Limbaugh has been defending his golf buddy, Trump, throughout the election season even though Trump has always been a liberal Democrat.  Looks like Rush will do whatever he has to for money.  Either he is violating his conservative beliefs because Rush thinks Trump is a friend or Rush feels he can make more money with Hillary as President and can talk about all of her bad policy decisions.

Either way, Trump has violated his trust with conservatives and, like Fox News, is now not a source for conservative news and information.

Oh how the mighty hath fallen. We have a lot of admiration for el Rushbo, but recently he’s really gone off the reservation since trying to appeal to his Trumpy listeners.

Today, he actually praised Trump as an “alpha male” for his douchebag press conference where he attacked Cruz’s dad and his wife.. again.

Here’s a transcript of his comments:

“TRUMP: All I did is point out the fact that on the cover of the National Enquirer there was a picture of him and crazy Lee Harvey Oswald having breakfast. Now, Ted never denied that it was his father. Instead he said, “Donald Trump…” I had nothing to do with it. This was a magazine that, frankly, in many respects should be very respected. They got OJ, they got [disgraced Democrat senator John] Edwards, they got this. I mean, if that was the New York Times, they would have gotten Pulitzer Prizes for their reporting.

RUSH: All right. So do you know what just happened here? This is alpha male versus I don’t know what, but the only reason Trump went here, the only reason he brought it up… He wasn’t really asked about. He brought this up because Cruz went to the Texas delegation and let it be known that his pique (p-i-q-u-e) is over the way Trump talked about his wife and his father. So what does Trump do? Triples down. He finds out where you’re vulnerable and comes right back at you with the sharp knife. This is alpha male, gang. This is the way… It isn’t beanbag. This is not for sensitive leftists.”

What the hell is wrong with Rush?! He used to have some integrity but he’s getting just as bad as Hannity or Eric Bolling in appeasing the toupee’d totalitarian. I understand he has to please his audience, but isn’t he wealthy enough?

Can’t he just be honest about what a scumbag Trump is? It’s not “alpha” to be a pathetic whiner like Trump is, even after he won the nomination!! If anything, it shows just how pathetically thin-skinned the despotic infant is, and how Cruz ruined his coronation party.

At least, conservatives can trust those who did not sell out to Trump like Rush’s conservative brother, David Limbaugh, who endorsed Ted Cruz for President.

Why I Just Quit the Republican Party

by Daniel Pipes Philadelphia Inquirer July 21, 2016 The Republican Party nominated Donald Trump as its candidate for president of...