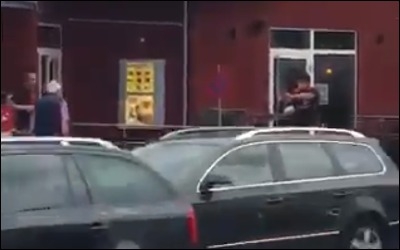 Though reluctant to speculate on motives when covering apparent Islamist rampages, the mainstream media jumped on early reports suggesting that Iranian-German teen Ali Sonboly (right) was a right-wing extremist.

Another shooting in Europe yesterday, this time in Germany, shocked the media into action. When news broke of an active shooter who began killing people in front of a McDonalds and then moved inside to the Olympia Shopping Center in Munich, it looked like another ISIS attack. But something was different this time.

Eyewitness reports began trickling in indicating that the shooter was heard complaining about refugees, so the media shifted gear, dropping the usual journalistic reticence when it comes to discussing a killer’s motives. Many seemed certain that this killer was finally part of the always-expected, but never-quite-materializing, backlash against Muslims.

The same tendency was evident across the political spectrum on cable news networks.

Fox News anchor Shepard Smith told his audience that social media was filled with reports of the shooter shouting “I am a German” and “[expletive] the foreigners.” After mentioning how unreliable social media can be, he repeated twitter posts about the shooter wearing “distinctive clothing,” indicative of right-wing, neo-Nazi types. In this case, it was the shooter’s boots. Compare this boldness to Smith’s past reluctance to mention on air the names of killers “with Muslim names” lest his audience jump to conclusions about their motives.

On CNN, Wolf Blitzer was confident enough to call the ongoing attack a “terrorist situation.” He noted that “millions of refugees…causing a huge political issue” were “destabilizing German society” and suggested that a “right-wing” anti-refugee event was underway. His guest, Massachusetts congressman Adam Schiff (D), concurred that it was likely a right-wing attack.

Over at MSNBC, Chuck Todd wanted to talk about “the big picture” which led him to “the refugee crisis” causing “anxiety and upheaval,” and to a German society “angry at Muslim presence.” Todd went so far as to “draw a straight line from Syrian refugees, to Brexit, to anxiety, to anger.” He hypothesized how the identity of the shooter might impact Angela Merkel’s future: a Muslim shooter would be detrimental, but a right-wing shooter could be shrugged off, perhaps even advantageous to her image.

With each passing moment as anchors, experts and guests awaited the German authorities to begin their press conference, things got even stranger.

At MSNBC, Chris Matthews filled air time by surmising that Munich was in the midst of a “Nativist Attack.” Cal Perry, MSNBC’s terrorism expert, bested him by labeling it a “Xenophobic Attack.” Perry expressed relief that the attack “doesn’t bear any of the similarities of ISIS attacks,” and pointed out that it was occurring on the “fifth anniversary of the Anders Breivik attack.”

Meanwhile back at CNN, Erin Burnett’s guest, retired Colonel Cedric Leighton, cited a report that the shooter had what sounded like a “southern German accent” and concluded that he was therefore not a refugee. “It’s very clear to me,” Leighton announced confidently, that the shooter “is not someone affiliated with ISIS.”

Juxtaposed with the trepidation and caution on display during the far more common instances of jihadist violence, this eagerness to cover right-wing terrorism betrayed a double standard that would have been hard to miss. It brought to mind the early coverage of the movie theater shooting in Aurora, Colorado. When reports came out that the killer was named James Holmes, ABC’s Brian Ross eagerly reported on air that a “Jim Holmes” of Aurora had recently joined the Tea Party in Colorado.

Rather than being fearful of saying the wrong thing, or concluding too quickly the significance of early reports, much of the media, especially the left, salivates over the prospect of right-wing terrorism (real or imagined). It is the raison d’etre of the Southern Poverty Law Center.

Many journalists still refuse to recognize the tell-tale signs of jihad terror, even subtle ones like when a killer declares his allegiance to Abu Bakr al-Baghdadi to a 9-1-1 operator or engages in ritual beheading. But a surprising number of journalists had no problem concluding that a German shooter who curses foreigners must be a right-winger.

Also notable in the early coverage of the Munich shootings is what was not said. There was no apparent

compulsion to calm audiences by asking that they rationally examine the statistics – after all, aren’t 99% of all jack-booted Germans who shout at foreigners really just peaceful, law abiding citizens?

When the German authorities finally told the world that the shooter was an 18-year old German Iranian from Munich, the mood changed quickly. And when it was revealed that this killer too had shouted “Allahu akbar” (the jihad battle cry), it was all too much.

So back they went to discussing Hillary Clinton’s Vice Presidential pick and analyzing the Republican convention speeches. False alarm.

News stories only get worse in Europe, the continent is in rapid decay as Islamic Terrorism becomes all more and...