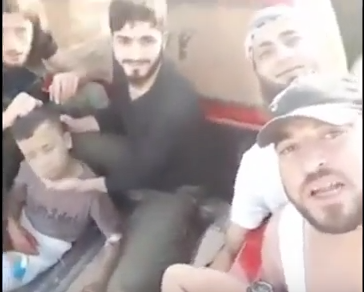 Obama-backed Syrian “moderate” rebels smile as they prepare to behead a 12-year-old boy (left), whose severed head is held aloft triumphantly in a later part of the video

The video is appalling even by Syrian standards. It shows a couple of grown men holding onto a small boy who is perhaps ten or 12 years old. One of them grips the boy by the hair while the other playfully pats his cheek. The men smile, laugh and give the thumb’s up. Then they lay the boy on his stomach, tie his hands behind his back, and draw a knife across his throat. In the final frame, one of the soldiers holds the severed head aloft in triumph.

“He sent us a child today, he no longer has men!” one of the rebels cries out in reference to Assad in the video, which went online on Tuesday. “We will leave no one in Handarat,” the rebels add, referring to the city north of Aleppo where heavy fighting has occurred between rebels and the government.
For its part, Liwa al-Quds put out a statement saying that the boy, whom it identified as Abdullah Issa, was not a fighter, but a Palestinian living in Aleppo with his family “among multiple poor families that live in the area under the control of terrorists.”

The statement said the boy had been ill, adding: “By taking one glance at the child, the argument that he was a fighter is immediately disapproved.” Indeed, little Abdullah looks too small even to hold a gun, much less shoot it. (An Associated Press story reported that the boy was suspected of spying.)

As shocking as this is, what makes it even worse is that Harakat Nour al-Din al-Zinki, the group responsible for the atrocity, is part of the U.S.-backed Revolutionary Command Council and has received TOW anti-tank missiles courtesy of the CIA and the Obama administration. When asked about the incident, State Department spokesman Mark C. Toner responded with his usual word games.

“We’re very concerned, certainly, if it’s accurate,” he said of the report. When asked if the incident would lead to a cut-off in military aid, he added: “If we can prove that this was indeed what happened and this group was involved in it, I think it would certainly give us pause … serious pause and we’ll look at, frankly, any affiliation or cooperation with this group we may have going forward, if these allegations are proven true.”

So the Whitehouse may drop Nour al-Din al-Zinki from its list of Grade A government-certified moderate rebel forces if a proper inquiry bears the story out. But these are weasel words for a number of reasons. First, there’s no doubt that the report is accurate. Raw un-doctored video footage doesn’t lie, and, what’s more, Nour al-Din al-Zinki has confirmed that the incident took place and that its fighters were involved.

Second, as judicious as Toner may sound in calling for proof, his decision to reserve judgment is actually a stalling tactic aimed at giving Nour al-Din time to extricate itself from the PR mess its fighters created. Indeed, Nour al-Din al-Zinki quickly put out a statement – possibly at the prompting of Brookings Institution Syria expert Charles Lister – declaring that the fighters have been arrested and a judicial commission formed to determine what had happened and decide on a punishment.

Needless to say, this doesn’t mean that a Sunni-fundamentalist group that Amnesty International has accused of kidnapping, torturing and killing journalists and dissidents won’t still cover the crime up. Neither does it mean that the killers won’t get off with a slap on the wrist. All it means is that the group will make a show of justice so that business can continue as usual. (In its statement, Nour al-Din al-Zinki also asserted that beheading a child does not represent the group’s overall policies.)

But the third thing that makes Toner such a weasel is that his statement doesn’t address the most important question of all: why the Obama administration armed such a brutal outfit in the first place. Toner’s statement doesn’t because it can’t. The Obama administration’s Middle East policy today is such a welter of confusion that it hardly knows what it’s doing itself.

The Obama administration claims to oppose Al Qaeda. But it continues to run interference for Saudi Arabia and other Persian Gulf petro-states that have bankrolled the group over the years and, according to no less an authority than Hillary Clinton, are still doing so today.

The administration continues to insist that the long-suppressed 29-page chapter of the joint congressional into 9/11 contains nothing important about Saudi links to 9/11 even though anybody who bothers to read it will know, as the indomitable Kristen Breitweiser has pointed out, that it details numerous contacts between Saudi operatives and the men who blew up the Twin Towers.

In Syria, the administration insists that it opposes both ISIS and Al Nusra, as Al Qaeda is locally known, yet it continues to supply arms to Nour al-Din al-Zinki and other outfits that ally themselves with such forces.

Similarly, the Obama administration claims to oppose torture, summary executions, and slitting the throats of twelve-year-old boys. But because it is determined to maintain the fiction that groups that engage in such horrors are moderates opposed to Al Nusra and ISIS, it protests so quietly that no one even notices.

The contradictions were on full display in Moscow last week when John Kerry took part in a joint press conference with Russian Foreign Minister Sergey Lavrov following talks about possible joint action against Al Nusra in Aleppo. When New York Times reporter Gardiner Harris suggested that such a deal would be “a huge boon to the Assad regime by concentrating American firepower against the most effective anti-Assad forces and that you’re basically selling out the rebels,” Kerry was indignant, responding:

“If some critic is criticizing the United States or Russia for going after al-Nusra, which is a terrorist organization, because they’re good fighters against Assad, they have their priorities completely screwed up. The fact is that Nusra is plotting against countries in the world. What happened in Nice … could just as well have come from Nusra or wherever it came from as any other entity, because that’s what they do….

“We saw what happened when people said the same thing about ISIL for a period of time – oh, don’t worry, they’re just a force against Assad, and down the road we can take them on. Well, they became more than just a force. And so I think that it is important for the United States, Russia … to stand up against terrorism, and that is what we intend to continue to do.”

But what is perplexing about such comments is that the Obama administration has repeatedly employed the same logic that Kerry now criticizes. It channeled arms and materiel to the Syrian opposition even though the Defense Intelligence Agency reported in August 2012 that Salafists, the Muslim Brotherhood, and Al Qaeda were “the major forces driving the insurgency,” that they were seeking to establish “a Salafist principality in eastern Syria,” and that the anti-Assad opposition was out to organize an all-Sunni jihad “against what it considers one enemy,” i.e. the Shi‘ites. 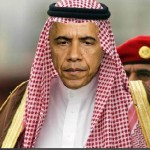 The administration stood by while the Saudis and other Persian Gulf states “poured hundreds of millions of dollars and tens of thousands of tons of military weapons into anyone who would fight against Assad, except the people who were being supplied were Al Nusra and Al Qaeda and the extremist elements of jihadis coming from other parts of the world,” as Vice President Joe Biden confessed two years ago before a student audience at Harvard. (Quote starts at 53:20.)

Instead of opposing Al Nusra and similar forces, the U.S. thus stood by as its closest friends supplied these jihadists with money and arms. As for the argument that ISIL (also known as ISIS, Islamic State, and Daesh) could be safely deployed against Assad, it wasn’t just certain nameless critics who said this but the White House itself.

While combating ISIS in Iraq, the U.S. attitude with regard to the group’s Syrian branch was startlingly blasé — even after it launched its devastating offensive in western Iraq in June 2014.

“Certainly, ISIS has been able to expand in Syria, but that’s not our main objective,” The Wall Street Journal quoted a “senior defense official” as saying in January 2015. “I wouldn’t call Syria a safe haven for ISIL, but it is a place where it’s easier for them to organize, plan and seek shelter than it is in Iraq.” The Journal added that “U.S. strategy in Syria is also constrained by a reluctance to tip the balance of power toward Syrian President Bashar al-Assad, who is fighting Islamic State and other rebels.”

Translation: Despite the havoc across the border, the White House still regarded Syria as a place where ISIS could be left alone “to organize, plan, and seek shelter” and thus keep up the pressure on Assad. That was its policy five months later when ISIS closed in on the ancient city of Palmyra. Even though Islamic State fighters would have been perfect targets as they crossed miles of open desert, the U.S. purposely withheld bombing so as not to tip the advantage to Assad.

As secretary of state, Kerry was thus party to the same policies that he now decries, policies based on leaving ISIS alone to make life miserable for Assad while others carried on unscathed. As a result, even he now seems to be confused.

Late last month at a conference in Aspen, Kerry emphasized the importance of defeating ISIS and Al Nusra along with “a couple of subgroups” such as Jaysh al-Islam and Ahrar al-Sham. The statement was accurate since both groups are indeed allied with Al Nusra.

In fact, Kerry has been so concerned about protecting such groups on other occasions that he asked 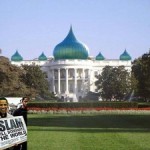 Lavrov last month not to bomb Al Nusra in Aleppo for fear of hitting pro-U.S. forces fighting side by side. Evidently, terrorists and non-terrorists are so intermingled that even Kerry has trouble telling them apart. [See Consortiumnews.com’s “Hillary Clinton’s ‘Entangled’ Foreign Policy.”]

The propaganda put out by the liberal media is far more misleading than the Propaganda from the days of the...