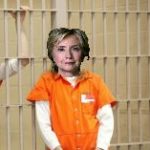 Watch as Paul talks with Eric Bolling on Fox News about Clinton’s crimes and the very real possibility with will be in a orange jumpsuit within the near future.