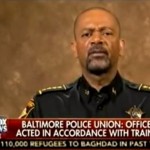 All the violence we’ve been witnessing in Milwaukee for the last few days? Yeah, that’s not a “protest.” You keep calling it that, but the fact is you’re just plain wrong. These are “riots.” Ugly, violent, racist, riots.

I know, I know. You get all uncomfortable when you’re forced to report things accurately. You hate to use a label that you think will get you called “racist” by the left. God forbid you’re not invited to the White House correspondent’s dinner.

But, and this is inescapable, a “riot” is a “riot.” No matter how much you try to pretend that the Social Justice Warrior who sets fire to a quickie mart is carrying out an act of bravery akin to standing up to a column of tanks in Tiananmen Square, the truth is he’s just a thug burning down a business.

“Protesting” is about changing things peacefully, not incinerating your fellow citizens’ gas stations.

…And while you’re working on your language skills, you could learn a thing or two from Sheriff David Clarke, who just hit the nail on the head when asked why these riots are happening.

In Case You Missed It:  Cloward-Piven strategy designed by Socialists Cloward and Piven to overloading the system to cause crisis
Posted in Freedoms and tagged blacks, Liberalism, Riots.

Burkini Versus Bikini Showdown in Corsica

A huge fight broke out between Muslim immigrants and native Corsicans after women wearing burkinis were photographed by a tourist....