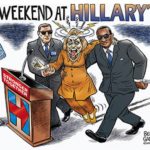 Dr. Drew’s comments on 790 KABC have been deleted from the station’s website and story about Dr. Drew admitting Hillary Clinton has brain damage has vanished down the Orwellian Memory Hole!

Physician and media personality Dr. Drew Pinsky weighed in on the state of Democratic presidential candidate Hillary Clinton’s health during a radio interview, stating that he and a colleague (physician and media personality Dr. Robert Huizenga) had “evaluated the medical record that she had released” and “were gravely concerned not just about her health, but her health care.”

Speaking on the McIntyre in the Morning show on KABC-TV in Los Angeles, Pinsky said, “Both of us concluded that if we were providing the care that she was receiving, we’d be ashamed to show up in a doctor’s lounge.”

Media analyst Mark Dice has the video below.

In Case You Missed It:  Two GOP Senators Kowtow to Marxists with Proposal to Cancel Columbus Day
Posted in Freedoms and tagged Clinton, Democrats, Election.

In a continued effort to address alleged man-made global warming, the Obama administration has finalized energy efficiency standards for medium...