In Milwaukee, Black Lives Matter activists, looters and rioters set out to hunt down and attack any and all white people. Sherelle Smith, sister of Sylville Smith, the criminal shot down in Milwaukee, called for rioters to stop burning down their own neighborhoods and businesses and head out to the suburbs and burn them down.

“You’re burning down s**t we need in our community. Take that s**t to the suburbs! Burn that s**t down! We need our s**t, we need our weaves, I don’t wear them but we need them. We need our gas, We need our food. We need this. You all want to hurt somebody, take that # further out.”

Was she arrested for inciting violence? Nope! As a matter of fact, CNN, immediately portrayed her as a hero in their newscast. Editing her screams, demanding the death of white people, down to a call for peace. (see video below)

“Family and friends holding a vigil marked by prayers with his sister calling for peace.” -Ana Cabera CNN.”

When the media refuses to report the truth, there should be consequences. The media and liberal politics have become interchangeable. The incestuous relationship of the liberal press with government has reached a new high. Media Research Center has a current list of those “revolving between working on behalf of Obama and positions in the news media” which has reached 30. There should be outrage over the destruction of real journalism. When will these so-called news agencies be held accountable for their lies and the fallout caused by their misrepresentation of the truth?

If we shift to Trump rallies and fund-raising events, we see innocent people attacked, beaten up, spit on and harassed for their political beliefs. Since the beginning of the campaign season, we have watched the violence escalate, yet nothing is done. Have you seen these videos shown and reported by the mainstream media? No, and you won’t, because if a conservative, a Trump supporter, a police officer or a veteran is attacked for any reason, it will not be reported, because their rights no longer matter under the current liberal definition of free speech, freedom of religion, the rule of law or just plain decency. The so-called tolerant political party only decries violence when it serves their purposes.

Add insult to injury, our government has promoted and continues to destroy the rule of law in the United States. President Obama refuses to enforce our immigration laws, while the IRS hands out tax refunds to illegals. Companies like Disney continue to abuse our visa system as an excuse to fire American workers and hire foreigners, the Department of Justice, headed by Loretta Lynch, recently filed, before a federal appeals court, that it is unconstitutional to hold criminals, who are poor, in jail when they can’t afford bail. The DOJ has also threatened to deal with anyone who dare criticize Muslims, while terrorism is targeted at Christians, gays and women. Meanwhile hard-working, law-abiding citizens are targeted for the color of their skin and the Obama administration along with Hillary Clinton and Tim Kaine, continuously blame law enforcement and white people for the violence.

We have all seen the destruction and mayhem caused by the importation of un-vetted refugees into Europe. Terrorist attacks and crime have escalated as a direct result of the irresponsible actions of their government leaders. Yet, as our media refuses to report these horrendous events, our president and Hillary Clinton are determined to march forward with allowing untold numbers of refugees that cannot be vetted, into the United States and into your local community.

What has happened to common sense and the rule of law? It has been ousted as racism, bigotry and white privilege. Therefore, vote for Hillary and lawlessness will escalate and will soon be coming to your town!

If you feel your town is too boring, please make your vote for Hillary so chaos and the excitements of beat-downs, rioting, and looting can give you a little excitement, maybe under martial law you’ll even see a big tank drive down your block? 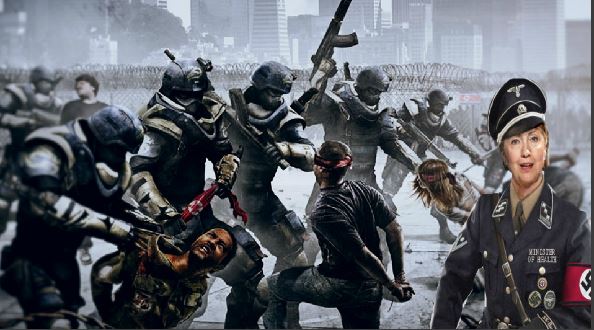 I don’t think most people realize just how close U.S. forces are to engaging in direct combat with Russia. Very...