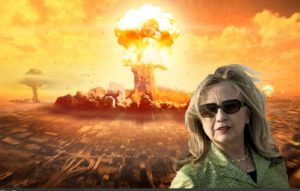 I don’t think most people realize just how close U.S. forces are to engaging in direct combat with Russia. Very close. And if you want to know how we got in this predicament in Syria, you might want to ask Hillary Clinton.

Over the weekend, Russian cruise missiles pounded rebel terrorist forces backed by the Obama administration., which is allied with them in their attempts to remove President Bashar Assad from power. After NATO and the USA created the failed states of Libya and Iraq they have eyed Syria to turn it into the next terrorist cesspool.

And you liberals thought Ronald Reagan would start World War III with nukes. That’s not exactly how it’s going down:

Russia’s three cruise missile launches were its first against targets in Syria from the Mediterranean, with previous ones made from its Caspian Sea fleet. On Tuesday Russian bombers began flying missions in Syria from Hamedan air base in Iran.

The upsurge in fighting and airstrikes in and around the city, split between government-held west and rebel-held eastern sectors, has prompted growing international concern, galvanized by pictures on Thursday of a dazed, bloodied child.

The plight of civilians in Aleppo has been aggravated in besieged areas by dire shortages of basic goods, leading the World Food Programme to warn of a “nightmarish” situation.

So what does this have to do with Hillary? In 2011, Hillary became the most ardent advocate in the Obama Administration for a policy of ousting Assad from power

But here’s the problem with people who take examples like this and try to say Hillary is a “hawk.” Anyone can say they’re for something. What really counts is what you’re willing to do to achieve it. The U.S. effort in Syria has been even more a fiasco than our “leading from behind” nonsense in Iraq, which has given rise to ISIS. Whether it’s Obama announcing red lines and then erasing them lest he actually have to take action, or the U.S. Armed Forces being present but not really being allowed to fight, the strategies of this administration are always the same: Get just involved enough to get yourself in the line of fire, but never really commit to doing what victory requires.

The Russians, meanwhile feeling desperate seeing the other failed states of USA so called “Democracy”, Syria is in Russia backyard, Russia also fear the deployment of missiles Obama is placing near its borders. JFK just about went into a Nuclear war with the USSR over one missile cite they put in Cuba, but yet we expect Russia to be surrounded with US missiles?

Hillary’s foreign policy instincts are exactly the same as Obama’s, which is why we’re in this mess in Syria. She’ll give lip service to a worthy goal, and then she’ll half-# it to where we can’t win but we can’t get out either.

That’s why we’re in the middle of this mess in Syria. Expect a lot more of this if Hillary’s elected. Don’t say no one warned you. Notice neither Obama or Hillary will offer solution to the Syrian situation, they only say we have to take in all their high risk migrants. Europe has already seen multiple attacks from these Migrants in the past year. SO rather than offer up solutions to stabilize Syria they prepare us for a mass flooding of high risk refugees into our cities.

Clinton, who rejoiced at the killing of Bin Laden and was very pleased with the death of Muammar Gaddafi, allocated millions to opposition bloggers and supported “orange revolutions” in post-Soviet space, will continue to exacerbate confrontation with Russia.

Clinton also left Americans to die in Benghazi, she is a warmongering lunatic and anyone that allows her to gain access to the Whitehouse is the equivalent to putting a gun to their own heads and pulling the trigger.

Hillary Clinton will not hesitate to send lethal weapons to Ukraine, she will insist to deploy NATO’s “peacemaking contingent” and freeze Russian business assets without trial.

It is an open secret that Hillary Clinton is a hawk just like today’s war lobby in the White House. She was happy about the killings of civilians in Ukraine saying that the Donbas is swarming with terrorists that have to be killed. During her service as the US Secretary of State, the US State Department switched to the military agenda entirely.

Hillary Clinton hates Russia, but the word ‘hate’ is a very soft one here. Her husband was breaking and humiliating Russia during the 1990s, publicly mocking drunken Yeltsin. Hillary would like to repeat her husband’s triumph. She does not understand what kind of a country Russia is today. She believes that today’s Russia is still the same as it was during the 1990s. She sees Russia as a weak but arrogant rival that needs to be crushed as soon as possible.

Former “hawk” and the father of Reaganomics, Paul Craig Roberts, stated that Hillary Clinton’s victory in the upcoming US presidential election would mean war with Russia. If Clinton takes office as president, the conflict between the two countries will be inevitable, and most likely nuclear.

Will Hillary Clinton be the woman, who will plunge the world into nuclear apocalypse?

The time remaining before midnight symbolizes intensity of the international situation and the probability of a nuclear calamity. Midnight means its beginning. Now the “Doomsday Clock” has stopped three minutes to Armageddon.

If Clinton makes it into office please visit all your friend and family, kiss your spouse and kids good night and prepare to be incinerated within five years or less.

“See, Damascus will no longer be a city
but will become a heap of ruins.
2 The cities of Aroer will be deserted
and left to flocks, which will lie down,
with no one to make them afraid.
3 The fortified city will disappear from Ephraim,
and royal power from Damascus;
the remnant of Aram will be

In Case You Missed It:  Get ready for more shortages: Truck driver shortage is getting worse and there aren't enough drivers to fix the problem
Posted in Freedoms and tagged Benghazi, Clinton, Nuclear Weapons, Russia, Syria, War, World War III.

When families lose loved ones, they often seek out funeral homes for solace and comfort and, for people of faith,...