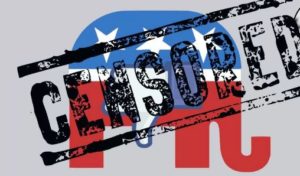 It goes without saying that we have to beat these people. But I want to beat them so decisively that their kind never rises again,” Hitlery.

Rest assured websites like mine will be shuttered. There is no question in my mind. In a stunning act of betrayal, Hillary brought the caliphate-inspired Organization of Islamic Cooperation (OIC) to Washinton DC to meet behind closed doors on plans to implement laws and policies to impose Islamic law on speech. she says.

And so it begins.

Democratic nominee Hillary Clinton’s campaign has sent out a fundraising email arguing the website Breitbart News has no “right to exist,” and suggests that if elected, the website will be shut down entirely.

“We’ve had a conservative media in this country for a while,” says the email, sent Thursday and signed by deputy communications director Christina Reynolds. “I don’t always like what they have to say, but I respect their role and their right to exist Reynolds’ acknowledgment that the regular conservative media has a “right to exist,” though, is used to contrast it with Breitbart, which apparently has no such right.

“Breitbart is something different,” she says. “They make Fox News look like a Democratic Party pamphlet. They’re a different breed altogether — not just conservative but radical, bigoted, anti-Muslim, anti-Semitic conspiracy peddlers who never have been and never should be anywhere near the levers of power in this country.”

One of the goals of Clinton’s campaign, Reynolds says, is to ensure Breitbart is destroyed.

“It goes without saying that we have to beat these people. But I want to beat them so decisively that their kind never rises again,” she says.

In Case You Missed It:  Lawmakers line up to urge Supreme Court to toss out Biden's unconstitutional COVID-19 vaccine mandate
Posted in Freedoms and tagged Clinton, Freedom of the Press, Liberal Fascism.

What’s Wrong With the Government’s Mandating of Energy Efficiency

The Obama administration’s Department of Energy has churned through a list of energy efficiency regulations before the next administration. Just...