A staffer for the democratic part was caught on camera in Las Vegas violating Nevada election law by publicly soliciting votes for Hillary Clinton. 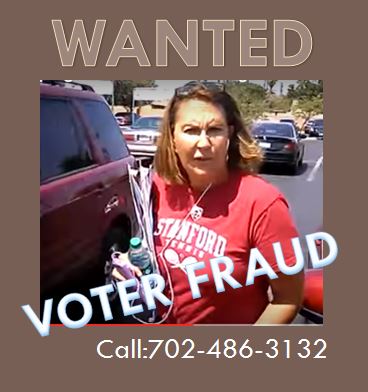 The woman in the video is a PR staffer, and is seen holding a sign up with a picture of Donald Trump crossed out, beneath are the words “Stand up to Trump, Register to Vote!”

“I’m working for the Democratic Party,” she states as the man shooting the video attempts to take pro-Hillary campaign material from Berman.

She then immediately makes a dash for her car while denying that she is carrying pro-Clinton material.

“This is in Las Vegas, people, it’s supposed to be non-partisan….you can’t put anti-Donald Trump stuff on the back,” states the man as Berman frantically searches for her car keys.

The man vows to “fill out paperwork with the state,” as the woman drives away before responding, “good luck with that.”

The footage clearly suggests that the woman is breaking the law by encouraging people to register in order to vote for a specific candidate;

The footage clearly suggests that the woman is breaking the law by encouraging people to register in order to vote for a specific candidate:

She then tries to make it seem like less of a big deal by said the black man that was signing up to vote was registering as a republican, however she’s still in violation of the law by telling you to sign up and vote against Trump by displaying anti-Trump material.

Would you expect anything else from the democrats? Voter fraud and fraud of any kind is their forte.

In Case You Missed It:  Pentagon halts production of vaunted F-35 after discovering Chinese alloy is a critical component
Posted in Freedoms and tagged Crime, Democrats, Election, Nevada.

Obama’s UNSC resolution will enable Hamas to attack Israel, shows a criminal disregard for the safety of Israelis

"Hamas is favorite to win Palestinian municipal elections. Hamas opposes the two State solution, its charter calls for the destruction of...