Prime Minister Binyamin Netanyahu met Tuesday with haredi journalists in his office in Jerusalem, capping off a series of meetings with various groups of reporters over the past several days. 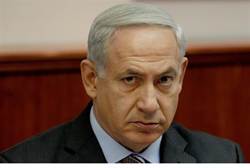 During the event, Netanyahu responded to questions regarding the possible evacuation of Jewish communities in Judea and Samaria as part of a final status agreement with the Palestinian Authority.

In his response, the Prime Minister said the Palestinian Authority’s insistence on the removal of such towns showed that “they want an ethnic cleansing.”

“What kind of a demand is this? It is ethnic cleansing. Are we also going to expel Arab [Israelis] living in the Triangle [region adjacent to Samaria] since it will remain under Israeli control?”

During the meeting Netanyahu also lashed out at former Prime Minister Ehud Barak, who has launched a series of scathing attacks on Netanyahu in recent weeks.

“He can blabber on all he wants and [try] to make his big comeback,” said Netanyahu. “If he has something to say, he’s welcome to come to the Knesset Security Committee and give his ideas over in their entirety.”

“Barak did a great deal for this country during his [army] service, but he also did a great deal of harm [as Prime Minister]; he was barely in office a year and a half before [voters] threw him out.”

Netanyahu went on to call Barak’s administration the greatest failure in Israeli history, citing the breakout of the Second Intifada; the abandonment of a Druze soldier who was killed near Joseph’s Tomb in Shechem; the lynch in Ramallah of two off-duty reservist soldiers; and the rushed retreat from southern Lebanon which, he said, empowered Iran and Hezbollah in the area.

A team of foreign veterinarians began taking measures on Tuesday to evacuate the last surviving animals from a zoo in the...