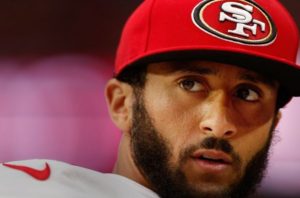 On Friday, San Francisco 49ers quarterback Colin Kaepernick refused to stand for the playing of “The Star-Spangled Banner.” When he explained why, he only spoke about the present: “I am not going to stand up to show pride in a flag for a country that oppresses black people and people of color.

Why did this spoiled, self-entitled, mediocre NFL athlete protest the nations National Anthem? Because he stands with the racist hate group ‘Black Lives Matter’ and refuses to participate in the National Anthem.

Some are saying the tactics behind the British military’s success was its active recruitment of American slaves. Some leftist say when Key penned “No refuge could save the hireling and slave / From the terror of flight or the gloom of the grave,” he was taking satisfaction in the death of slaves who’d freed themselves.

The verse the leftist are referring to in the song is not an insult to black people or even to American slaves. The British Army almost exclusively used Hessian (German) mercenaries to fight the War of 1812. In rare instances they used units comprised of escaped bondsmen or freeman (but for the purposes- mercenary) African-American troops, as well.

The words “hirelings and slaves” is a dismissive reference to the British forces as a whole- not to any individual black unit. And to wish an invading army “the terror of flight, or the gloom of the grave” and to use violent imagery in the midst of war is perfectly understandable- especially after they just burned and looted down your country’s capital to the ground (Washington DC) and beat you in battle and have imprisoned you.

“Their blood has wash’d out their foul footstep’s pollution.No refuge could save the hireling and slave From the terror of flight or the gloom of the grave”

This is written in middle English, the English of Shakespeare, John Milton, and the Kings James Bible, unless you’re scholar of middle English it’s difficult to understand. This is what I understand. Their blood has washed away their dirty past deeds, but no refuge to save their indentured worker and slave from the terror for running away or from death. You must remember that these men where British Citizens, also American English is a form of modern English that is totally different grammatically from the English, English; you have totally skip the second stanza in order to make a racially bias point.

Realistically, blacks taking up arms in the cause of British Loyalism only obtained freedom for themselves as individuals. The British government continued to allow slavery until 1833. In Ireland, India, Africa, and later, in China, the British Empire still operated an opportunistic regime.

“...During the War of 1812, Key, accompanied by the British Prisoner Exchange Agent Colonel John Stuart Skinner, dined aboard the British ship HMS Tonnant, as the “guests” of three British officers.”

Key was a prisoner that night on the British ship, not a visitor as some on the left are claiming. This is another leftisy historical inaccuracy.

Skinner and Key were there to negotiate the release of prisoners, one of whom was Dr. William Beanes. Skinner, Key, and Beanes were not allowed to return to their own sloop because they had become familiar with the strength and position of the British units and with the British intent to attack Baltimore. Thus, Key was unable to do anything but watch the bombarding of the American forces at Fort McHenry during the Battle of Baltimore on the night of September 13–14, 1814.” the American and Commercial Daily Advertiser on September 21, 1814. https://en.wikipedia.org/wiki/Francis_Scott_Key

More important than teaching Americans our history is teaching them ACCURATE history. Teaching half-true propaganda from one very left side is just as lowbrow and mediocre as what racist white academics did to slaves during that time.. Shame on you liberals; yet again!

The national anthem is and always will be a special part of the pre-game ceremony. It is an opportunity to honor our country and reflect on the great liberties we are afforded as its citizens. In respecting such American principles as freedom of religion and freedom of expression, we recognize the right of an individual to choose and participate, or not, in our celebration of the national anthem.

Kaepernick, by endorsing and supporting the domestic terrorist group, Black Lives Matter, the NFL should release him from the NFL and the 49ers of any contract monies still within the contract.

In Case You Missed It:  The post-vaccine WIPEOUT of children’s immune systems has arrived
Posted in Freedoms and tagged Black Privilege, Racism, United Socialist States of America.

Nothin Like This Before – Housing Markets In The Hamptons, Aspen & Miami All Crashing

by Tyler Durden One month ago, we said that "it is not looking good for the US housing market", when...