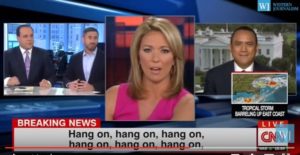 BORIS EPSHTEYN: 17,500 emails that she lied about turning over. The server wipe. Within weeks of there being a report that she had a private server, it was wiped. She thought that “C,” which stands for classified, stood for cookie or something. She thought that drone strikes are not classified. She said that the reason she used a private server was for convenience, that she only had one device, she used 13 Blackberries and 5 iPads. This is somebody who is absolutely disqualified from becoming president. They destroyed Blackberries with hammers in the State Department.

EVAN PEREZ: Yes they did, Brooke. As you mentioned there were 13 devices, mobile devices and 5 iPads that the FBI said that in some way were used with her private email server and they did in some cases just destroy them with hammers when they were done using them.

In Case You Missed It:  Pentagon lusts after nuclear war, says it will “nuke Russia” if Putin doesn’t pull out of Ukraine
Posted in Freedoms and tagged Clinton, CNN, Crime, FBI.

By A. Dru Kristenev Before the race-baiters and social justifiers rail against the concept of a protected border, be reminded...