“We came, we saw, he died!” – Hillary Clinton on Gaddafi “All is fair in love and war” – where nothing is out of bounds and all the rules of ‘hard play’ are acceptable. The story of Muammar Gaddafi vs. West reminded me of this saying – it is one of the ultimate betrayal and manipulation. Once upon a time, Libya was every Capitalist’s nightmare. Its people didn’t exist simply to pay the bills – there were no rental costs, there were no electricity and utilities costs, education and medical care was free. Much like the Soviet Union, for a number of decades Libya was a flourishing socialist state.

Democracies often corrupt our terminology – using “authoritarian” and “dictator” interchangeably – when it’s not the same thing at all. A true leader comes around once in a blue moon – and when the people recognise it, he stays for a long time.

The US 1986 attempt to assassinate Gaddafi failed. In 1992, they took a different approach by imposing sanctions for being “a dictator.” We now know that sanctions are never about taking the moral high ground – it is about asserting force, it is about bankrupting a country, it is about attacking their revenue streams – in this case, oil – it is about freezing its financial assets, just so that they will do as they are told.

As Libya’s economy was so dependent on oil – the only option was to mend ties with the West, agreeing to dismantle the majority of Libya’s armed forces. Gaddafi wrapped up his military programmes and the oil trade resumed. However, as we continue to learn, the West’s appetite for control in countries not their own is insatiable.

“The only mistake I made was trusting the Westerners” – Gaddafi is quoted as saying.

Sarkozy was the first to launch a blow against Gaddafi; the very man who had funded him, helping him to become the President of France. It is said that the Sarkozy campaign received around 50 million Euros from Gaddafi in 2007. 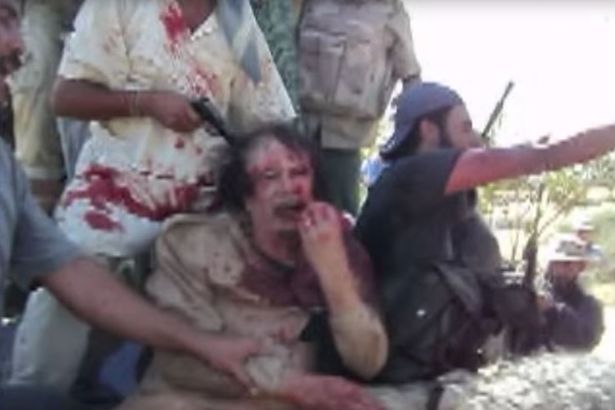 NATO’s arrival of democracy and freedom to Libya. 2011

Having orchestrated the government coup, the Western coalition killed the Colonel and plunged the country into chaos. The authoritarian leader once ruled Libya’s many clans “with an iron fist”, providing the closest thing to anti-capitalist utopia. Today inter-ethnic conflict prevails and the country is in shambles.

But that is where the Western ‘outwitting’ of Gaddafi stops. The Colonel had warned that Libya is the only real gatekeeper between Africa and Europe. Without a hard stance on human traffickers, Gaddafi prophesised that “the European continent will turn black.” The Libyan government used to patrol its coasts, often dealing to traffickers harshly. Gaddafi was criticised for this by predominantly Soros “human rights” NGOs. In 2016, traffickers do business uninterrupted, and can make up to a million dollars per boat load of refugees into Europe.

[Caution: The video gets loud at 12.10 – but watch for the Westerner who is probably US special forces. They should not have been in Libya at the time – this was against international law. As explained by Putin in the video after, the Western coalition, using the appropriate tools of international law – the United Nations – imposed a No Fly Zone over Libya. In blatant contravention to it, Gaddafi’s regiment was taken out by a drone.]

In Case You Missed It:  Retiring Never-Trumper Fred Upton: It Will Be Hard for Uniparty to Stop Trump in 2024 and He Will be the Candidate (VIDEO)
Posted in Terrorism, Tyranny and tagged Africa, Europe, Illegal Immigration, Libya, Migrants, Terrorism.

There is so much information about Clinton corruption that it’s hard to keep up with it. The new FBI release...